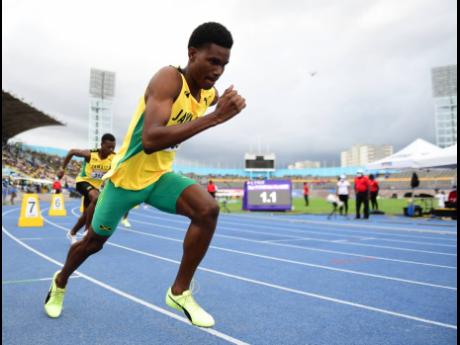 Jamaica’s J’Voughnn Blake on his way to gold in the boys U20 800m final at the Carifta Games in Kingston on Monday.

National junior middle distance runner J'Voughnn Blake says his next ambition is to break the 1:46.00-minute barrier in the 800m this year.

Blake, 19, won the 1500m and 800m titles at the Carifta Games at the National Stadium earlier this week, and also captured the double for Jamaica College at the ISSA/GraceKennedy Boys and Girls' Athletics Championships (Champs) earlier this month.

However, despite these achievements, Blake's season's and personal best time over 800m is 1:47.62 minutes.

Blake said that he tried his best at the Carifta Games to lower that time, but was restricted by his body.

"I am very disappointed with it actually," he told STAR Sports. "I guess my body is tired and it is hard to carry the pace on my own. I am still pleased, having gone through Champs last week and [Carifta] this week again, I think I just need to rest and recover." he said.

Blake's time has ranked him fourth in the world this year among the juniors, behind the world leader Emmanuel Wanyonyi of Kenya, who has a season's best of 1:45.56.

Blake said that he is hoping that he will be able to hit the 1:46 mark before or at the National Junior Trials this June ahead of the World Athletics U20 Championships in Cali, Colombia, in August.

"I am definitely trying to hit that target of 1:46 by then and I have time to do it," Blake said. "I believe in my coach, but I should have been able to get it by now, but I will wait patiently and I should be in tip-top shape by then.

"That first lap (at Carifta Games) was too slow, it should have been 52 flat, but I am not worrying about hitting that target before the World Juniors.

"I just need to keep doing what I am doing now, getting a little bit more rest and then I should be fine."