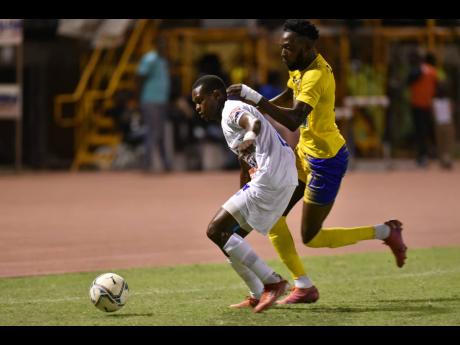 The St Ann-based side beat Molynes United 3-2 in their Jamaica Premier League (JPL) clash at Stadium East last night. Strikes from Trivante Stewart and Tarick Ximenes in the 12th and 15th minutes gave Mount Pleasant the lead before a brace from Nicholas Nelson in the 32nd and 37th minutes restored parity.

Daniel Green got the winner in the 60th minute with his 10th goal of the season to solidify their fourth-place position with 31 points and move within one point of third-place Arnett Gardens (32).

Mount Pleasant took advantage of their early dominance in the 12th minute thanks to Stewart, who fired home from close range to haunt his former team. Molynes' issues were further compounded three minutes later as Ximenes stormed his was through the defence and slotted home his first in a Mount Pleasant uniform to the delight of their supporters.

However, as Molynes slowly found their feet, they were giving Mount Pleasant a challenge as they created chances of their own with Nelson the focal point of their attack. A one-time shot from the national attacker in the 32nd nestled in the corner to cut the deficit to one. Similar to Mount Pleasant, they would find their second minutes later as Nelson got his brace to erase Mount Pleasant's advantage.

The pace was frantic in the second half as Molynes pushed for the go-ahead goal will Nelson at the forefront. He had a shot blazed wide in the first few minutes after the break and a low cross found him minutes later but his attempt was straight to goalkeeper Akeel Clarke.

It would be a chance he would regret as Green's lob in the 60th minute went over the head of Molynes goalkeeper Jonathan Campbell and into the net.

But Molynes were relentless throughout and the latter stages in the second half turned into a personal battle between Clarke and Nelson. Clarke rushed to deny Nelson's effort in the final 10 minutes of the game and in stoppage time, Nelson's curling effort did not get past Clarke.

The defeat leaves Molynes in 11th place with 14 points.