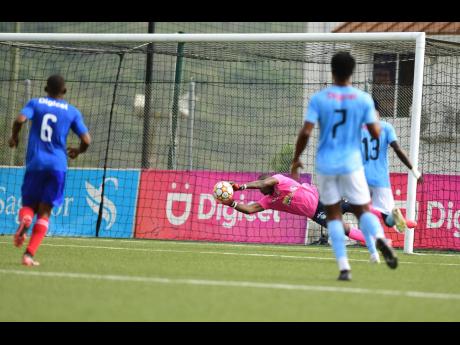 Waterhouse goalkeeper Kemar Foster parries the ball away during a Jamaica Premier League game against Dunbeholden FC at the UWI-JFF Captain Horace Burrell Centre of Excellence in St Andrew on Sunday, January 30. 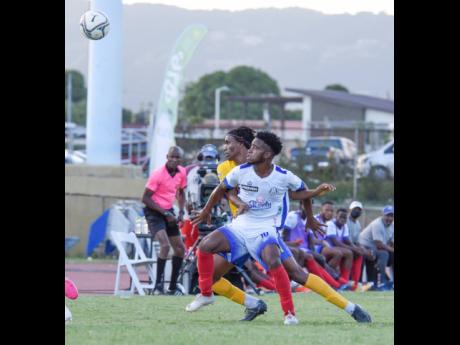 Malike Stephens (right) of Portmore United FC blocks Trey Bennett of Harbour View from the ball in their Jamaica Premier League game at Stadium East in St Andrew on Sunday.
1
2

Montego Bay United (MBU) assistant coach Dwayne Ambusley came out of retirement to help secure a 2-2 draw with Arnett Gardens to earn their first point since March 20 when they drew 0-0 with Harbour View. It was also the club's first multi-goal game since January. With the squad hit by injuries, the 41-year-old operated in relief with little preparation, with a performance he dedicated to his late grandmother.

In his third game for his new club Mount Pleasant, Tarick Ximines showed the skills that brought him to the St Ann outfit. Operating in his right-back role, Ximinies scored Mount Pleasant's second goal in their 3-2 win over Molynes United with a brilliant individual effort, beating three defenders before firing into the bottom corner.

Waterhouse's Denardo Thomas got the all-important goal in their 1-0 win over Humble Lion on Monday. But goalkeeper Kemar Foster ensured that the team made their return to the top of the table for the first time since March, with a brilliant save to deny an equaliser from Humble Lion's Andre Clennon. It was an important win for Waterhouse, as their attention now turns to regional duties in the Concacaf Caribbean Club Championship.

Portmore United are now winless in six games after their 2-0 defeat to Harbour View, and are the second team to change coaches this season. Lenworth Hyde resigned because of personal reasons on Monday, and the club wasted no time filling the vacancy, appointing former Tivoli Gardens head coach Philip Williams to the position. It may be too late to salvage this season for Williams but his focus will be on building the team to be competitive again next season.

Arnett Gardens were favourites to brush aside MBU, the bottom club in the league who has been hit with injuries and needed 41-year-old assistant coach Dwayne Ambusley to come out of retirement and play. Howeve, they lost the lead twice and were forced to settle for a 2-2 draw, the second straight game they dropped points. The consequences now put them seven points away from the top two and a first-round bye. Their next game against second-place Dunbeholden could determine if they still have a chance at the top two.

Dunbeholden made a crucial error in giving up a penalty to Tivoli Gardens, which saw them settle for a 1-1 draw. That result, combined with Waterhouse's 1-0 win over Humble Lion, sees them fall to second place on goal difference while tied on points (39) with new leaders Waterhouse. While they have a seven-point lead over third-place Arnett Gardens, they cannot afford to be complacent with five games remaining, especially as Arnett will be their next opponent.