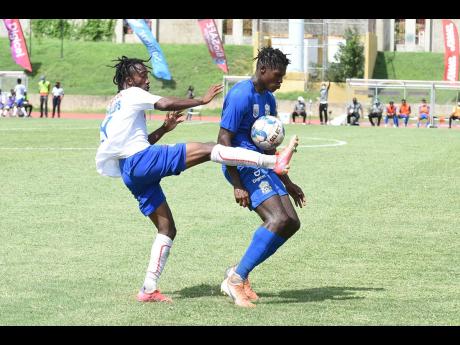 Portmore United’s Demario Phillips puts a boot in to take the ball away from Molynes United’s Sergeni Frankson during their Jamaica Premier League game at Stadium East in Kingston on Saturday, July 10, 2021.

Before heading to the FLOW Concacaf Caribbean Club Championship, Cavalier's Dwayne Atkinson struggled for goals in the Jamaica Premier League (JPL), with only one in 15 games. His performances at the tournament, which saw him finish as the golden boot winner, have now translated to domestic play, as he scored a brace in their 4-1 win over Molynes United. The goals, his first since February, will boost his confidence and that of his team, as they look to make their push up the table for a high seed in the play-offs.

The second St Catherine derby of the season between Dunbeholden and Portmore United was heading towards a stalemate, with Dunbeholden on the verge of losing ground in their bid for the number one seed. Thanks to Dunbeholden midfielder's Demario Phillips brilliant free kick in stoppage time, it gave them a crucial win and put them tied on points with league leaders Waterhouse (42), although Dunbeholden have played a game more. Additionally, Dunbeholden's win also saw them sweep the season series against their rivals, having defeated Portmore 3-2 in March.

Mount Pleasant's Trivante Stewart's goal was the difference in their 1-0 win over Arnett Gardens on Monday, but the team will be thanking their goalkeeper Shaven Paul for preserving their clean sheet, which included a crucial save from Arnett Garden's Fabian Reid, in the final minutes of the game, to keep Mount Pleasant in third place and give them a chance of sneaking into the top two places.

Arnett Gardens could not find a way past Paul and suffered a 1-0 defeat to the St Ann-based club, dealing a critical blow to their top two chances. A first-round bye is now out of their hands as they can only accumulate a maximum of 42 points, the same as Dunbeholden who are in second place and have a game in hand.

A bad day at the office for Molynes United in their match against Cavalier SC got worse as Sergeni Frankson was sent off in the first half for a violent challenge, with Cavalier already leading 2-0. Molynes were made to pay in the second half as they slumped to a 4-1 defeat, their 13th of the season and extending their winless run to six games.

While Harbour View still have a game in hand, their 2-0 defeat to Vere United did not do them any favours in their bid to qualify for the play-offs. They still have their game against league leaders Waterhouse to play, as well as Dunbeholden in the final game of the regular season in two weeks. With Harbour View on 24 points, one point behind sixth-place Tivoli Gardens (25), any slip-ups from Tivoli must be taken advantage of. Games in hand will not be an advantage for Harbour View if they do not get maximum points.