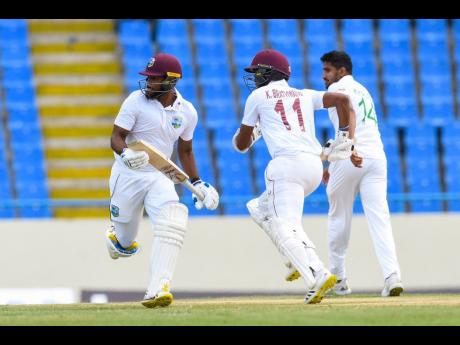 West Indies openers John Campbell (left) and Kraigg Brathwaite cross for a quick single during the post lunch session on Thursday’s first day of the first Test between Bangladesh and West Indies at the Sir Vivian Richards Cricket Stadium in North Sound, Antigua and Barbuda.

John Campbell struck his third Test half-century but his first in 16 innings as West Indies required just shy of half-hour to complete a seven-wicket victory over Bangladesh in the opening Test yesterday.

Resuming the fourth morning at the Vivian Richards Cricket Stadium on 49 for three and requiring only 35 runs for victory, West Indies cantered to their target in seven overs without further loss, with the left-handed Campbell punching an unbeaten 58.

Vice-captain Jermaine Blackwood finished on 26 not out, helping to anchor a 79-run, fourth-wicket stand which pulled West Indies around from the dire straits of nine for three late on Saturday's third day when seamer Khaled Ahmed(3-27) scythed through the top order.

The victory gave West Indies a 1-0 lead in the two-match series, which continues in St Lucia next week with the final affair at the Daren Sammy Cricket Stadium.

"I think obviously the coaching staff is doing a very good job. I think Kemar Roach is really leading from the front, both on and off [the field], and how we bowled first day really summed it up," said captain Kraigg Brathwaite.

"I thought the lines and lengths we bowled early [were great]. We didn't take long to get into stride and I thought that was superb and that basically set the tone for the game."

Picking up on his overnight 28, Campbell struck nine fours and a six in a breezy 67-ball knock which lasted just short of one and three quarter hours while Blackwood, on 17 at the start, counted two fours in a 53-ball innings.

A couple of boundaries in the day's second over from pacer Ebadot Hossain got Campbell on his way and he moved to the brink of his half-century with another brace of boundaries off Khaled, to bring the target down to single figures.

He swept off-spinner Najmul Hossain Shanto for a boundary to reach his 50 off just 63 deliveries and ended the game in the same over by clearing the ropes at long off.

Roach was adjudged Man of the Match for his seven-wicket match haul, including his five-wicket haul on Saturday which strengthened West Indies' hold on the contest.