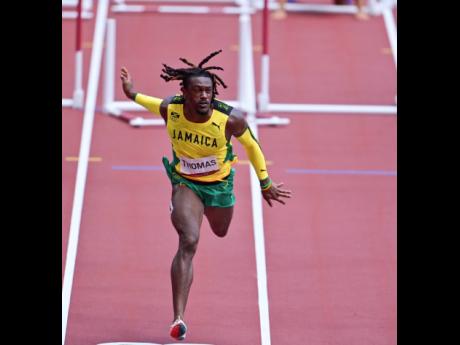 Damion Thomas' first year as a professional athlete has opened his eyes. Every 110 metre hurdler he races against now is gifted and resolute. Still, the 2021 Olympic semi-finalist knows what gives him a chance to succeed - he hurdles by faith.

Asked to pinpoint the difference between college athletics and the professional ranks, the 2021 NCAA Indoor 60m hurdles champion said, "I feel like all of my life when it comes to the track and field, I've always stepped on the track and felt like I was blessed and talented and one of the best guys out there. Okay, I'm going to win this race. Okay, for sure, I'm going to go out there and take care of business today.

"But the pro circuit is like, every meet I go to, it's like looking in the mirror. There are guys who, all their lives, they were told they were the the best hurdler. Some of these guys, they're the national record holders for their respective countries. It's a different mindset when you go into a stadium with these meets and you just see the mentality. All these guys are strong. There's not one guy that looks intimidated."

Now training alongside Olympic 100m hurdles queen Jasmin Camacho-Quinn in Florida, Thomas revealed the asset he feels will make him a great pro.

"I really do believe I have a divine calling or a higher purpose from God for this," he said. "My faith is not easily moved. I think, year in and year out, I've always dealt with the ups and downs. For example, falling in Hengelo, and being able to come back the next race and shoot for a season best. I just think it's my faith."

Thomas was speaking about a two-race sequence where he took a mid-race tumble on June 6 and then produced his 2022 best, 13.40 seconds, on June 12 in New York.

The National Championships start in Kingston on Thursday and Thomas is ready.

"I know for a fact that I'm going into Trials in peaking form," he said.

Last year, he cut his senior personal best (PB) to 13.11 seconds to nab the runner-up spot. With the last two Olympic champions entered for the meet, Thomas knows he has a difficult task ahead but he recalled, "I came in with a PB of 13.22 at the time. I remember distinctly coming into the finals with the fifth fastest time, just thinking, 'Okay, we need to be two spots better the next day. I was able to go out there the next day, run a personal best and make the squad, getting second in a really, really tough field."

Aware that the World Championship qualifying time is 13.32 seconds, he concluded, "I personally think it's going to take more than what I've done this year for sure to get to that top three but that's the goal."