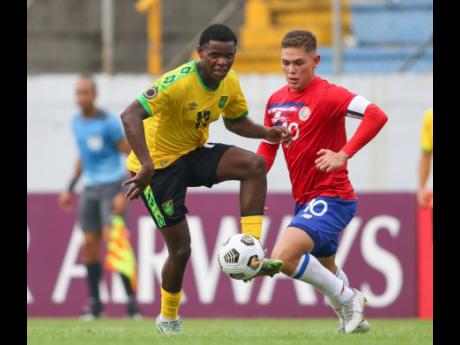 Malachi Douglas of Jamaica drives the ball forward during the 2022 Concacaf Under-20 Championship match against Costa Rica at the Francisco Morazán stadium in San Pedro Sula, Honduras last Saturday. The game ended in a 1-1 draw.

National midfielder Jemone Barclay said that they need to mount a response in their final group game of the Under-20 Concacaf Championships when they face Antigua and Barbuda today at 5 p.m. at the Estadio Francisco Morazan in Honduras.

The young Reggae Boyz are coming off a 5-0 thrashing by the young Hondurans on Monday night, having played an entire half with 10 men when Lamont Rochester was sent off three minutes into first-half stoppage time for a denial of a goalscoring opportunity. He was initially given a yellow card but this was upgraded to red after a video assistant referee review with Jamaica already down 2-0.

Barclay's assessment was short and direct in how the team performed in the muddy conditions with their second-round qualification status now in doubt.

"It was a very difficult game and the result showed it," Barclay said.

Jamaica were outclassed, thanks to a brace from Marco Aceituno in the third and 35th minute, followed by goals from Isaac Castillo in the 48th and Jefry Macias with a double in the 58th and 85th minutes.

Jamaica drew 1-1 with Costa Rica in their opening game on Saturday and had hoped to have booked their passage to the second round on Monday. Despite the heavy defeat they are still in control of their own second-round qualification destiny as the top three teams in the group will advance to the round of 16. The young Boyz are in third place with one point while Antigua and Barbuda have zero points, having lost back-to-back games. Jamaica would need to avoid defeat to secure their knockout round place while Antigua have to win to snatch the qualification spot.

Barclay said that the players have to raise their levels if they are to avoid a first-round elimination.

"Today (Monday) just wasn't our day. We have to come again for the game against Antigua. That's it," Barclay said.

The tournament will determine teams that will qualify for the Under-20 World Cup next year in Indonesia.