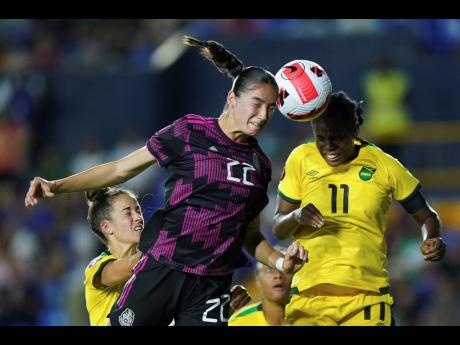 Jamaica opened their final round of their FIFA Women's World Cup qualifying campaign with the best possible start, defeating Mexico 1-0 in their Group A opener at the Concacaf Women's Championship in Monterrey, Mexico on Monday night.

An eighth-minute goal from Khadija Shaw was enough to stun the hosts and give interim head coach Lorne Donaldson his first win on his return to the senior women's programme.

Donaldson gave a full debut to English-born Drew Spence who got her international clearance, and started Denisha Blackwood in her first international game in nearly a year, after being sidelined with an injury. Tottenham Hotspur goalkeeper Rebecca Spencer got her third consecutive start of the campaign.

Jamaica's early pressure paid off in the opening 10 minutes as Blackwood's delivery from a freekick found Shaw at the backpost and she soared over the Mexican defence to glance the ball past Mexico goalkeeper Emily Alvardo and into the net.

However Jamaica would have to navigate uncomfortable moments, with Mexico hitting the post minutes after the goal and Spencer needing to make an excellent save in the 26th minute from Carolina Jaramillo's volley from outside the box. Jamaica was awarded a penalty in the 39th minute when Casandra Montero was called for a handball in the box after a Video Assistant Referee review but Havana Solaun put her penalty kick over the bar.

Jamaica had chances to double their lead in the second half but Jody Brown could not get her shot on target when she was sent through on goal in the 48th minute. Shaw chipped Alvardo in the 53rd minute but the ball hit the post.

Jamaica are tied on three points with world champions the United States, their next opponents on Thursday. The Americans defeated Haiti 3-0 earlier in the evening.