OregonGoldRush | No sweat for Parchment in 110m hurdles prelims 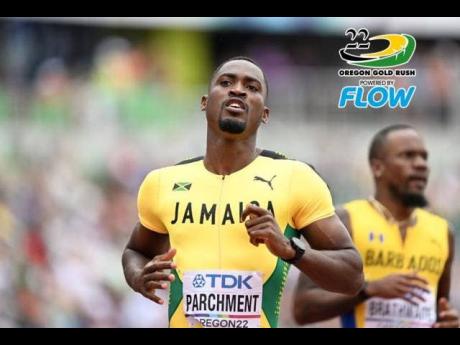 Jamaica's Hansle Parchment crosses the line to win his heat in the Men's 110m Hurdles at the World Athletics Championships in Eugene, Oregon on Saturday.

Olympic champion Hansle Parchment, and compatriots Rasheed Broadbell and Orlando Bennett are all through to the semi-finals of the Men's 110m Hurdles event at the World Athletics Championships in Eugene, Oregon on Saturday afternoon.

Parchment, the fastest Jamaican in the event this year, won heat four in 13.17 seconds, the second fastest time of the round.

Broadbell finished second in heat one in 13.36 while running from lane eight. He was beaten by the United States of America's (USA) Trey Cunningham (13.28), while Great Britain's Andrew Pozzi was third in 13.45.

Bennett was fifth in his heat, advancing as a non-automatic qualifier in 13.55. That heat was won by Spain's Asier Martinez in 13.37.

World indoor champion Grant Holloway, of USA, won his heat in 13.14, the fastest time of the round. His teammate Devon Allen also won his heat, in 13.47, to automatically advance. However, their teammate, Daniel Roberts, the US national champion, was disqualified after falling in his heat.