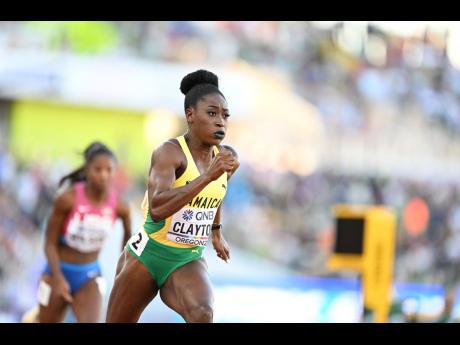 Rushell Clayton in action during the Women’s 400m Hurdles final at the World Athletics Championships in Eugene, Oregon on Friday.

While she could not replicate her bronze medal-winning performance from Doha 2019 at the weekend, she says that just getting back to the final is an achievement in itself after two injury-plagued seasons.

Clayton finished sixth in the final in 54.36 seconds which was won by Sydney McLaughlin, who broke the world record for the second time this season, and fourth in her career, clocking 50.68 seconds. The Netherlands' Femke Bol was second in 52.27, and former champion Dalilah Muhammad was third in 53.13. It was Muhammad who set the world record of 52.16 in the final three years ago. This year's feat left her inspired and has also motivated her to improve.

"When I saw the clock I was like, 'Oh my God!,'" Clayton said. "This is my second time being in a world record race and it's just amazing what these ladies can do. And if they are young ladies and doing that, it tells me that I can do the same. I just need to go back and put in way more work. I have been putting in some good work but I still can put in some more. If that is the time that they are running, then I have got to get up there too."

It is a championship that she hasn't taken for granted after her Tokyo Olympic dream was cut short because of injury.

"For someone who hasn't competed in two seasons, and to be back in a world championship final that is just amazing," she said. "I have been running faster and faster each race, well, except for this one. But I can't even complain because it is yet another sub-55 seconds.

Clayton says that Elite Performance head coach Reynaldo Walcott has made the difference this year as she run a personal best in her semi-final, 53.63, just to get back into the final.

"I am leaving this championship happy," she said. "Before the year started, I didn't know that I could run a personal best. I have had so many challenges. They believed that I could do it. He has been out there with me at four in the mornings pushing me. Without him, I don't think I would be here."