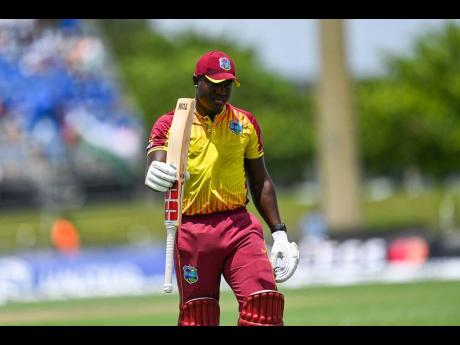 As the nation continues to celebrate the exploits of the athletes at the Commonwealth Games and the World Athletics Under-20 championships, national cricketer Rovman Powell is hoping that he and the West Indies team can add more smiles as the regional side gets ready to take on New Zealand (NZ) in T20 International action in Kingston.

Sabina Park is set to host three T20 Internationals against the Black Caps starting tomorrow and Powell is keen to shrug off a disappointing 4-1 series loss to India recently, and kick-start a winning campaign for the Men in Maroon.

"That is always the mantra of West Indies players and teams. We are just trying to bring smiles back to the faces of the people. We remember the glory days of West Indies cricket and the guys are working hard on doing that," said Powell.

It is going to take some doing for the West Indies to convince local fans that they can deliver on their word, especially coming off heavy defeats, albeit against the world's number one ranked Indians.

The number five ranked Kiwis won't be any easier. However, vice-captain Powell is urging the players to remain focused and come up with the goods.

"International cricket comes fast at you, so whether you are successful or not in your previous series, you have to put that quickly behind you, and that is what the team is trying to do at the moment."

Head coach Phil Simmons has said that these three T20s will be somewhat of a trial for some players who will be looking to impress, as the Windies finalise their plans ahead of the next World Cup.

With that in mind, Powell believes the troops will have to dig deep to find form and show their true potential at the international level.