‘Boyz call-up chance I could not turn down’ 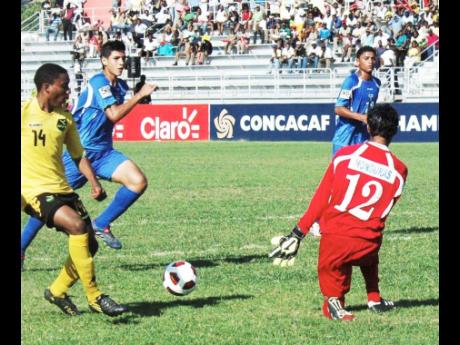 Exeter City forward Jevani Brown has expressed delight over his call-up to Jamaica's Reggae Boyz squad for a four-team tournament in Austria later this month, saying it was an opportunity he could not turn down.

The 27-year-old United Kingdom-born former Young Reggae Boyz attacking midfielder has been in fine form for the English League One side, scoring three goals so far this season.

"I'm delighted with getting a call-up," said Brown, who is set to miss two league matches and one cup game while in Vienna, where Jamaica will take on World Cup qualifiers Ghana, Morocco and Qatar in the mini tournament to be held between August 20 and 26.

"As everyone knows it's not an actual international break, so I'll be missing a couple of games, which is not ideal; but it's one of those ones where it was an opportunity that I couldn't turn down."

Exeter manager Matt Taylor has said he is thrilled for Brown who represented Jamaica at the 2011 FIFA Under-17 World Cup in Mexico.

"There's no bigger accolade than international recognition, and if he goes and plays for Jamaica I'm absolutely delighted for Jevani, his family, his support network and everyone who's been through his journey so far," Taylor said.

Brown says he and his Exeter strike partner Sam Nombe have "clicked together" this season.

Nombe assisted a Brown goal for the second time in three league games as Exeter took the lead before losing 2-1 at Cambridge United on Saturday.

The pair have scored seven goals in four games between them this term.

"Me and Sam have got that connection that everyone's seen from the start of the season," Brown said.

"We've just clicked together, we know each other's game, it's working really well and, hopefully, we can stay injury-free and continue doing what we're doing."

But this season the pair have been one of the most successful strike forces in the third tier, having helped Exeter win promotion from League Two in May, when they finished runners-up to champions Forest Green Rovers.

"It's been a good start, not just from me, but from all the boys," added Brown, who moved to Exeter after being released by Colchester United at the end of the 2020-21 season, after the Cambridge defeat.

"The first three games have been very good, the results outstanding, and today was a spanner in the works."