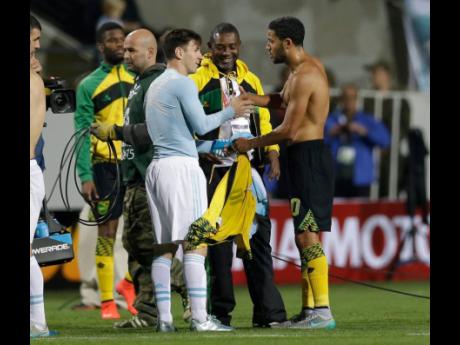 Argentina’s Lionel Messi (left) changes his shirt with Jamaica’s Joel McAnuff at the end of the Copa America Group B soccer match at the Sausalito Stadium in Vina del Mar, Chile, in 2015. Argentina won the game 1-0.

Micheal Ricketts, president of the Jamaica Football Federation (JFF), wants the Reggae Boyz to use the friendly international against Argentina to showcase their talent against some of the best players in the world.

The match will take place on September 27 at the Red Bull Arena in New Jersey starting at 8 p.m. The Argentinians, ranked No 3 in the world, are expected to be led by Lionel Messi, Angel Di Maria, Rodrigo de Paul, Paulo Dybala and Giovanni Lo Celso.

"It is a huge deal for us. For us to be rubbing shoulders with Lionel Messi is every player's dream and we were intent on getting some of these high-profile games. The Messi fans will get the opportunity to see one of the finest footballers in the world," Ricketts said.

The JFF boss pointed out that his organisation had to work very hard to secure the game as the JFF adopts the strategy going forward of getting more quality opponents for the Reggae Boyz.

"We signed a contract with Argentina and this game of course will be played at the Red Bull Arena in New Jersey on September 27. We wanted to get some of these high-profile games and it took some hard work but the end result is that we were able to sign the contract and the game is definitely on," Ricketts said.

He added that the match is on a FIFA date, which should make the coach have the best Reggae Boyz.

"It is FIFA and barring injuries, I think that the best players will be available for us because this is a very big game and we want to put on an excellent showing for the country," Ricketts said.

The Reggae Boyz were beaten 1-0 by Argentina in their last meeting at the Copa America in 2015 and Ricketts is hoping that this game will also help to attract more international sponsors for JFF.

"We are just hopeful that we will have some positive spin-offs. We have been able to sign a contract with Adidas which really should change the whole landscape of football in the country and we are intent on getting other international sponsors on board because that is the ambition of the JFF to try to get overseas sponsors to supplement the local sponsors," Ricketts said.

JFF recently signed a four-year kit sponsorship with Adidas which will take effect on January 1.