Thompson Herah in action in Luzern 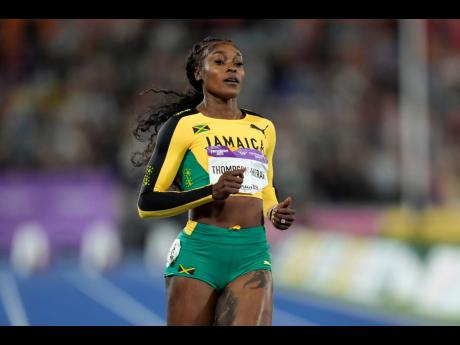 Double Olympic sprint champion Elaine Thompson Herah will be hoping to put a rare false start behind her when she targets the Spitzen Leichtathletik meet today at the Stadion Allmend in Luzern, Switzerland.

The third to last World Continental Tour silver meet of the season will feature Thompson Herah competing in the women's 100 metres at 1:13 pm, which will also have United States of America's (USA) Sha'Carri Richardson in her first meet since the USA's Championships in July, where she failed to make the team for the World Athletics Championships.

Thompson Herah was disqualified because of a false start and Fraser-Pryce withdrew because of an injury.

Shashalee Forbes and Natasha Morrison will run in the women's 100 metres B race, with Forbes also doing the sprint double at the event.

For the men, Commonwealth Games champion Rasheed Broadbell and Tokyo Games Olympic champion Hansle Parchment will battle at 12:25 p.m. in the men's 110 metres hurdles for the second time in four days in the A race.

Broadbell clocked a personal best time of 12.99 seconds, beating reigning World champion Grant Holloway of the USA for the second time in a row in Lausanne. Parchment finished fourth in 13.13 seconds. Damion Thomas will compete in the B race of the event at 1:18 p.m.

World Championships semi-finalist Ackeem Blake will line up in the men's 100 metres facing World Championship silver medallist Marvin Bracy of the United States at 12:59 p.m. Blake is coming off winning the 2022 NACAC title in 9.98, his fourth sub-10-second clocking this season. Nigel Ellis will compete in Heat B at 12:52 p.m. and also in Heat B of the 200 metres at 2:13 p.m.

NACAC champion Andrew Hudson will compete in Heat A of the men's 200 metres at 2:20 p.m.