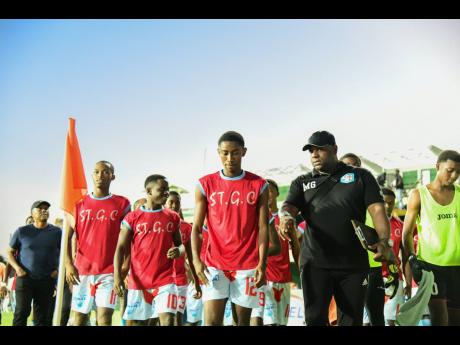 Members of the St George’s College team take the field for warm-up exercises ahead of their Manning Cup match against Ardenne High at Sabina Park on Saturday. They later found out that items were stolen from their dressing room.

POLICE ARE investigating the circumstances in which items including electronic gadgets were stolen from the dressing room of St George's College on Saturday, while they engaged Ardenne High in the Inter-Secondary Schools Sports Association (ISSA)/Digicel Manning Cup football competition at Sabina Park.

It was a bitter, sweet day for St George's, who had earlier drubbed Ardenne 6-0 before finding out that the dressing room had been broken into and according to a source close to the institution, items such as phones, bags, jewellery, driver's licence and other identifications and phone watches were taken.

"So until we have some concrete information as to what took place, I do not want to make any other comment," Wellington said.

The St George's source, however, stated that the incident has left members of the North Street-based institution fuming, as the area was supposed to be considered a secured space.

"The robbery was real. The youths really lost their valuables and it is hard to take knowing that is supposed to be a secured environment," the source, who wished to remain anonymous, said.

The insider noted that at half-time the bags were not checked, but it appeared that everything was intact then. The players, however, realised after the completion of the match that things were missing and raised an alarm.

"Nothing was ransacked. The person or persons who did it knew what they are doing. You know the security features iPhones have and all the phones were offline just a few hours after, even the phone watches. So it is all a mystery," the anonymous source disclosed.