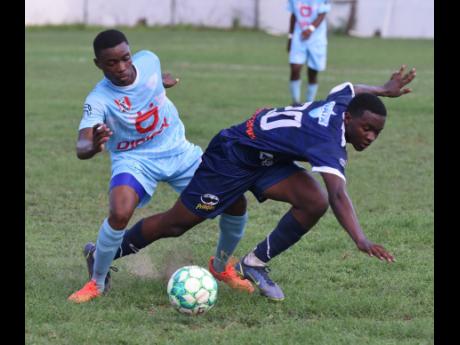 Jaheem Frazer (right) of Jamaica College is bundled off the ball by St Catherine High’s Rolando Redman during their ISSA/Digicel Manning Cup football match at the Spanish Town Oval on Friday. The match ended 0-0 and St Catherine will face neighbours St Jago at the same venue today.

St Jago sit atop the group with maximum six points from two starts, followed by Jamaica College (JC) and St Catherine with four points each.

Coach of St Jago, Garnet Lawrence, admits the fixture is important to the fans, for bragging rights purposes, however, he insists they have greater reasons for a victory and hopes his players are not daunted by the intense atmosphere.

"St Catherine are now the powerhouse in Spanish Town. So we want to turn the tables a little," Lawrence commented.

"This would mean just another victory for us. It won't be like we won a trophy. It is a derby but three points will give us a little distance away from them and JC. So there is a lot banking on this game.

"We will be in a good position (if win), that is why we are not going for the derby bragging rights. The win would really consolidate our position and any slip up after that win would give us room to breathe," he continued.

Lawrence pointed out that though his players are fairly young, once they can maintain their composure under the derby pressure, St Jago can collect the three points.

"Most of them, it is their first derby and if they get to understand, while the game is going on, what a derby is like and feels like. I believe they will come out victorious," Lawrence said.

"A win is a win regardless of the opponents because it is never easy and anything can happen. They are up for the occasion. They got a little taste of vibrant spectators when they played St Mary's College last week.

"St Catherine will be favoured but the win will mean a lot and that is what we will aim for," he stated.

Walker Cup holders, St Catherine, won their first match and drew the other against JC.