Toney reveals why he rejected Jamaica 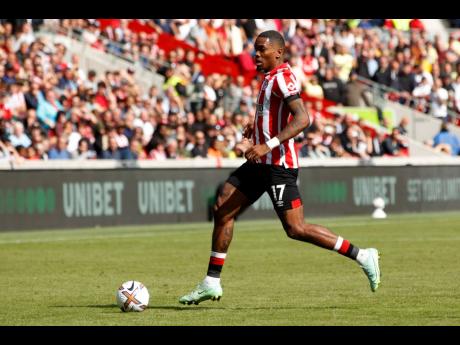 Brentford’s Ivan Toney controls the ball during the English Premier League match between Brentford and Arsenal, at the Gtech Community stadium, London on Sunday, September 18, 2022.

Formerly a target for the senior national team, newly minted England invitee, Ivan Toney, says that the expanding chances of being able to play for the land of his birth as well as improving his own performance in the English Premier League (EPL) were factors that influenced his decision to turn down an offer to play for the Reggae Boyz

Toney who plays for Brentford FC was speaking at a press conference yesterday ahead of England's National League fixture with European champions Italy on Friday, the first of two games England will have in this window with the 2022 World Cup two months away.

Toney, whose mother (Lisa Toney) has Jamaica roots, was selected as part of head coach Gareth Southgate's squad for the game which also includes a tilt against Germany on September 27. Toney was approached by the Jamaica Football Federation as part of their overseas recruiting efforts. However, the player said his sole focus at the time was getting Brentford promoted to the EPL last year.

"I turned them down because at the time I was focusing on the play-offs and it was a big chapter in my career. And I wanted to focus on getting promoted to the premier league so that was the main thing at first," Toney said. "And it then sort of fizzled out and I just concentrated on playing in the Premier League which is everyone's dream. And I felt that my chances were getting bigger and bigger to play for the England senior squad."

"There are big names that I am playing with. I have got to take it in my stride and hope that I get some more playing time with them," Toney said.

Toney has scored five league goals and provided two assists in seven appearances so far for Brentford in the 2022-23 season. The club is currently in ninth place.