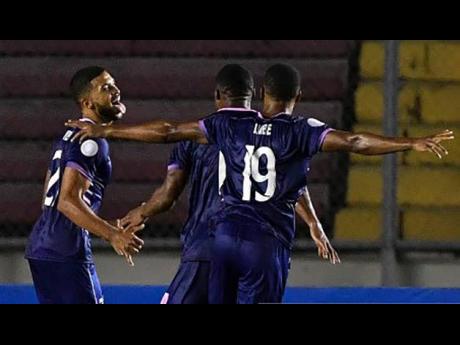 Bermuda players celebrate in a match.

Bermuda have been awarded three points after Montserrat cancelled their CONCACAF Nations League Group B match here in June, the Royal Gazette said.

The newspaper said according to the CONCACAF website, which has updated the result of the fixture scheduled to be played at the Flora Duffy Stadium, a 3-0 victory to Bermuda has been "decided by the disciplinary committee".

Bermuda's Football Association (BFA) said it has yet to receive any official confirmation or correspondence from CONCACAF regarding the ruling, the Gazette adding that its attempts to clarify the reason for the abrupt cancellation had failed.

The points lift Bermuda off the bottom of Group B above Montserrat, reigniting lingering hopes of securing a Gold Cup play-off spot for finishing second.

Kyle Lightbourne's side now sit third on four points, six adrift of leaders Haiti, but crucially only two below second-placed Guyana with two matches remaining against those sides in the next international window.

Bermuda will play Guyana at home on March 25 and Haiti away three days later.

The original cancellation of the fixture on June 10, just four days before the match, came as a shock with the BFA releasing a statement to confirm it had been notified by CONCACAF that the match had been called off.

When contacted by the Gazette at the time, CONCACAF confirmed it had been "informed by the Montserrat FA that its men's national team were unable to travel to Bermuda for their CONCACAF Nations League match".

However, the organisation was unable to confirm the reason behind its inability to travel stating that the match has, "as per competition regulations, been referred to CONCACAF's Disciplinary Committee".