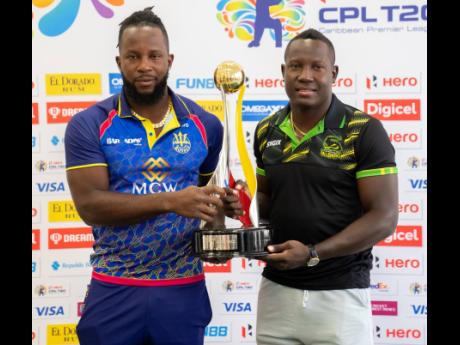 The pulsating 10th edition of the Caribbean Premier League will culminate today in Guyana where Jamaica Tallawahs seek to put their hands on the prestigious trophy for the third time.

Standing in their way are the Barbados Royals, who are also looking to secure a hat-trick of titles, after wins in 2014 and 2019, with Tallawahs securing the trophy in 2013 and 2016.

The 6 p.m. (Jamaica time) start means the contest will take place under lights and if that is anything to go by, Tallawahs may feel comfortable knowing that their last two wins at Providence have been at nighttime.

Despite contrasting win-loss ratios in the preliminary phase of the competition, the teams match up fairly evenly having split their encounters this season.

While Royals, who finished in last place last season, have been dominant in the power play with both bat and ball, it is not the same for Tallawahs, who have only been good with the ball thanks to Mohammed Amir, who has picked up nine of his 16 wickets upfront.

A late fitness test will determine Amir's availability and despite this setback captain Rovman Powell is confident his team can come up big on the day.

"I think the guys are feeling upbeat. Barbados is a very strong team, possibly the best in the CPL so far but our guys are up for the challenge to face the best team," said Powell.

Several key matchups in different departments will be under the microscope. On the batting side, Tallawahs have the competition's second leading run scorer in Brandon King who has scored 339 runs this season.

Not far behind King is Royals' captain Kyle Mayers who has racked up 337 runs in 11 innings.

Mayers' big impact with both bat and ball is expected to be a key weapon for the Barbados franchise and the left-hander is ready and raring for the challenge.

"I look forward to big games like this. I am one of those players who want to do well for the team, especially when it comes to championship time," said Mayers.

Tallawahs will also be banking on the bat of Barbadian Shamarh Brooks who scored a masterful unbeaten century against the Guyana Amazon Warriors in qualifier two, which helped to take Tallawahs to the championship game.

Left-arm spinner Imad Wasim will be keen to add to his 16 wickets, while keeping the bats of the powerful Rahkeem Cornwall and Azam Khan quiet.

All-rounder Jason Holder has been the trump card with the ball for Royals, especially at the death, as his 16 wickets are among the top in the tournament. Obed McCoy and the dangerous Afghan spinner Mujeeb Ur Rahman could also impact the outcome of the grand finale.