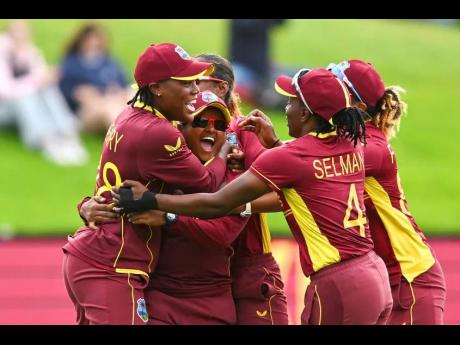 West Indies Women celebrate a victory over England in the ICC Women’s World Cup in Dudedin, New Zealand in March 2022.

The Caribbean side, the 2016 champions, face England Women in their first game at Boland Park in Paarl on February 11, before travelling to Newland in Cape Town four days later for a clash with powerhouses India Women.

Installed in Group B of the February 10-26 tournament, West Indies will round out the group stage with games against minnows Ireland in Cape Town on February 17, and against Pakistan on February 19 in Paarl.

Hosts South Africa take on Sri Lanka in the curtain-raiser at Newlands on February 10, with reigning champions Australia facing New Zealand in the second match of the double-header at Boland Park a day later.

"We are thrilled to be announcing the match schedule for the next ICC Women's T20 World Cup as we look to build on the success of Australia 2020 and host a uniquely African celebration of cricket," ICC Chief Executive Geoff Allardice said, after the fixtures were officially announced on Monday.

"As a key strategic priority for the sport, women's cricket continues to build momentum and engage more fans than ever before.

"With T20 as the growth vehicle for cricket, we are confident that this event, and the inaugural Under-19 Women's T20 World Cup preceding the senior event, will leave a lasting legacy to grow girls' and women's cricket around the world."

West Indies are one of 10 teams which will do battle in the competition in South Africa, the second in three years following the Australia showpiece in 2020. The tournament will see 23 matches being played across Cape Town, Paarl and Gqeberha over 15 days