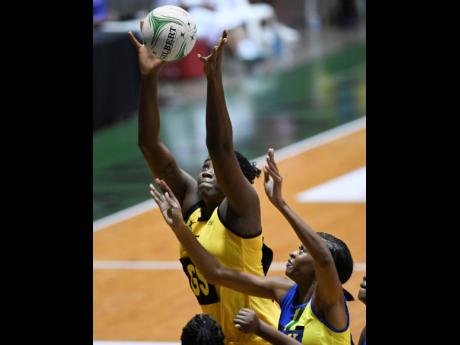 Jamaica’s Jhaniele Fowler (left) catches the ball while under pressure from St Vincent and the Grenadines’ Kaywanna Charles during an Americas Netball World Cup qualifier at the National Indoor Sports Centre on Sunday.

As Jamaica's youthful senior netballers continue to make impressions in their bid for selection to next year's Netball World Cup squad, captain Jhanielle Fowler is not only optimistic about how they have responded to the challenge, but also how they have embraced the role she is playing in moulding those who want to prove themselves.

Fowler only played one quarter in the Sunshine Girls' 70-16 thrashing of the United States in their second game of the Netball World Cup regional qualifiers on Monday at the National Indoor Sports Centre. She scored 13 of her 15 attempts and watched from the sidelines as Gizelle Allison and Amanda Pickney led the way with 23 and 22 goals, respectively, in another dominating performance as Jamaica continued to use the tournament to increase their ranking points, with the World Cup in mind.

With solid numbers from Pickney and Allison, Fowler said that she is encouraged by the talent assembled who can challenge for roster spots.

"I'm super excited, because at least we know that we have players who can step up into the shoes of the experienced netballers, and that they are working really hard. The Netball World Cup is coming up and they are going to want a spot, so they also have that opportunity and this is their time to shine," Fowler told STAR Sports.

In guiding the youthful Sunshine Girls, Fowler's role in this squad has been more than just a leader, but as a nurturer in building an environment that allows the new players to perform and to learn.

"The environment has been really good. They look up to me, so I have to ensure that I lead by example and lead from the front, and that the girls have a positive role model to follow," Fowler said.

It's the example that she intends to continue demonstrating during this week, as she said that no position for the World Cup squad is guaranteed, not even hers.

"Positions are open all over the court, even the goal shooter's. I have to wait and see what we do to get the spot," Fowler said.