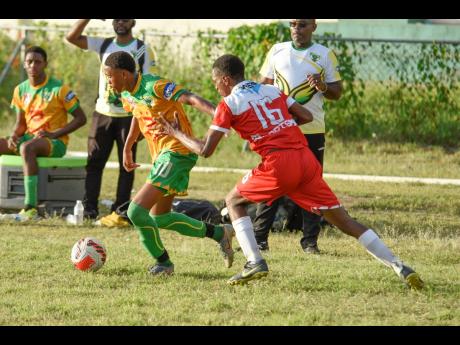 Excelsior’s Nickalia Fuller (left) dismisses Dimitri Steele of Campion College during their Manning Cup match at Excelsior High on Thursday. Fuller was instrumental in Excelsior’s 3-1 victory and is expected to figure prominently in their game against Haile Selassie today.

Haile Selassie will be hoping for a positive start in their quarter-final quest when they face Excelsior High in the second-round first-leg match today at 3 p.m. at Calabar, after a positive and fruitful preliminary round on their return to the ISSA/Digicel Manning Cup schoolboy football competition this season.

Halie Selassie sat out the 2021 season because of difficulties arising from the Covid-19 pandemic, which reduced the number of participating teams. On their return they finished second in Group C with 21 points, scoring 18 goals and only conceding six, the second-fewest in the group behind group leaders Charlie Smith.

Haile Selassie registered six wins this season, with their only defeat being to Charlie Smith on October 1, which ultimately made this difference in the race for the top spot in the group.

Meanwhile, Excelsior cruised through group play undefeated with seven wins, winning Group F with 24, scoring 21 goals and conceding seven. The Xavier Gilbert-coached Excelsior have been led by Nickalia Fuller, who has provided the goal-scoring threat.

Excelsior are looking to make the quarterfinals for the third tournament in a row in their quest for an eighth Manning Cup crown and their first since 2004.

Meanwhile, Tivoli High will hope to cause a surprise when they face Mona High in their first-leg encounter at Stadium East.

As one of the four best third-place teams, Tivoli made it to the quarterfinals for the second time in six seasons, finishing third in Group C which included Charlie Smith and Haile Selassie.

The Craig Butler-coached Mona High bulldozed their way into the second round with a perfect record of 10 wins and scoring 55 goals, the most any team has produced in the first round.

Donahue Mitchell and Zhaine Pinnock have been the main goal-scoring contributors for Mona, however, they have managed to get goals from different players in various situations this season.