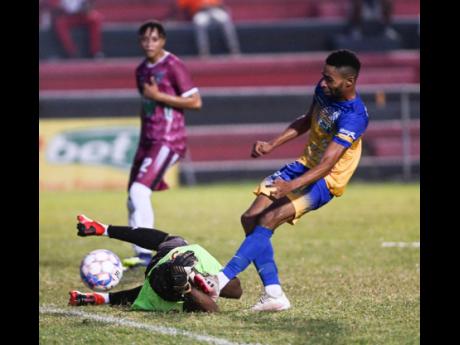 Head coach Paul 'Tegat' Davis is emphasising the importance of this Jamaica Premier League (JPL) season and the need for Arnett Gardens to be at optimum levels with the return of relegation after their gritty defeat of Cavalier 2-1 at the Anthony Spaulding Sports Complex last night.

Christopher Ainsworth opened the scoring for Cavalier in the 55th minute but Ajuma Johnson equalised for Arnett in the 69th minute. Second-half substitute Revaldo Mitchell got the winner on his debut, with the last kick of the game in the 96th minute.

It was a game that left Cavalier frustrated not only because they failed to hold on to a point, but having their captain Kyle Ming sent off after Johnson's equaliser for violent conduct. It was a call that changed the game for Cavalier and left technical director Rudolph Speid bemused.

"I don't think it was Ming who did it. I'm not saying something didn't happen but I am positive it was not Ming. Once we went down and we had to go to our bench, all of those players hadn't played in the Premier League before and it was a bit of a struggle from there," Speid said.

The call, combined with the equaliser gave the home team life after a first half which saw them struggle to penetrate Cavalier's backline and saw Dwayne Anderson giving the Arnett backline trouble throughout the game.

Davis said that the introduction of Shande Davis and Kimani Arbouine changed the momentum of the team.

"It wasn't what we said in the locker, but it was the changes that we made when we took out Fabian Reid. They brought life to the game, more dynamic play to the game," Davis said. "We played a well-coached organised team in Cavalier. These guys know when to go, when to cut."

Speid lamented the loss of his captain for the immediate future but is optimistic about the long-term health of the team in how they will respond and how they will grow this season.