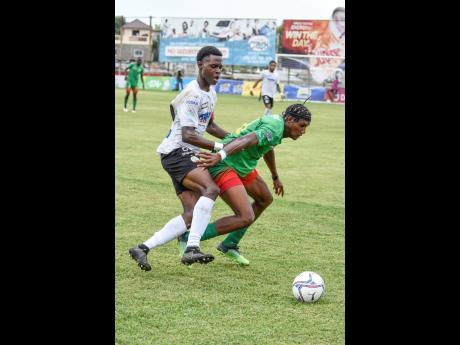 Cavalier’s Kyle Ming (left) tries to get around Kemar Mullings of Humble Lions during their Jamaica Premier League match at Anthony Spaulding Sports Complex in April.

Vere United captain Ricardo Campbell had a tall order to hold off Tivoli Gardens' onslaught with only 12 players to call upon in their season opener. The grit and determination that he showed marshalling a makeshift backline is the main reason Vere United held on for a 1-1 draw.

Mount Pleasant were given all that they could handle in their season opener against newly promoted Faukland FC. They needed a good second-half performance to turn the tide as they rallied to a 2-1 win for new head coach Theodore Whitmore's first win in charge.

Waterhouse were down and out themselves in the first half when they were trailing 1-0 to Molynes United, but thanks to a second-half brace from Devroy Grey, the Marcel Gayle-coached Waterhouse ensured that they have three points to start their title quest.

Harbour View could have also been on the other end of a surprise by promoted Chapelton Maroons, but they avoided an opening day shocker, powering to a 2-0 win as Chapelton Maroons had the defending champions concerned for most parts of the game. Their slow start in the game, however, has head coach Ludlow Bernard concerned.

Whether he was baited into the incident by Arnett Gardens' Damari Deacon or not, Cavalier captain Kyle Ming did himself no favours in the fracas that led to him being sent off in the first Monday night football game of the season. Suspensions were a big problem for Cavalier at the beginning of last season and Ming's red card made the difference as Cavalier went on to lose 2-1 to Arnett Gardens.

In that same confrontation, Arnett Gardens' Damari Deacon is not entirely blameless as it seems that he made more of a meal of the challenge that led to Cavalier's captain Kyle Ming being sent off, which gave Arnett Gardens the momentum with a man advantage. Whether he embellished the pain when he hit the turf or not, it did convince the referee to hand down the punishment.

The only thing negative about Chapelton Maroons' performances was the result, but it was by no means because of a lack of effort. The promoted Chapelton Maroons provide Harbour View with problems, even as they did not field a full squad, because schoolboy football commitments and administrative issues left their bench somewhat bare.