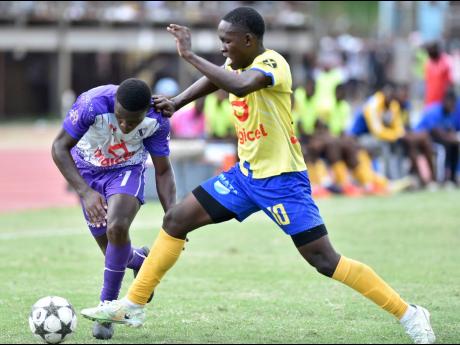 Coach of Jose Marti Patrick Lewis is proud of their performance in the ISSA/Digicel Manning Cup schoolboy football competition, despite receiving a 9-0 mauling by defending champions Kingston College (KC) to end their campaign in the competition this year.

It was a day to forget for Jose Marti, as their hopes of springing an upset against KC in Saturday's second-round, second leg evaporated in 20 minutes, but Lewis praised his players for being in a position that was not expected at the start of the tournament.

Jose Marti had played to a goalless draw with KC in the first leg, being the first to shut out the defending champions, who were ruthless in the second leg to end the Spanish Town-based Jose Marti's brief stay in the second round.

According to Lewis, they achieved their outlined objectives, which they set at the start of the season, and they now look positively to the rest of the football season, with a focus on the Walker Cup silverware.

"Our short-term goal was to get out of the first round and then we take it from there. We are now in the process, so we are still working on ourselves (to improve)," Lewis said.

He praised Jose Marti's goalkeeper Gavin Messam, who had a difficult day in goal, starting from the second minute when a shot from KC's Dujuan Richards trickled into the corner of the net, leaving the custodian rooted to the spot. It was the start of a four-goal burst in the first 20 minutes.

Lewis stated that Messam had a fall at home a few days before the second leg, which left him wounded.

"Our goalkeeper was injured, so I knew it was going to be an uphill task. We are in good stead in terms of where we reached in the second round. No one expected us to get out of our zone and we did that, so I am still proud of the boys," Lewis told STAR Sports.

Jose Marti were the last to qualify for the second round after finishing third in Zone F, which included Excelsior High and Campion College.