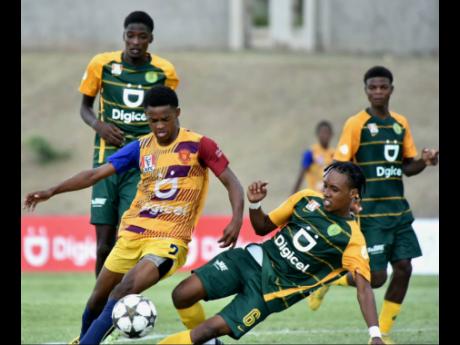 Coach of St Andrew Technical High School (STATHS), Philip Williams, is delighted they have remained consistently strong in the second year of his latest project with young men hungry for success.

STATHS are appearing in yet another quarterfinals of the ISSA/Digicel Manning Cup football competition, after an offseason of tragedy and triumph.

The Bumper Hall-based STATHS progressed despite losing 1-0 to St Jago in Saturday's second-leg second-round tie at Stadium East, winning the tie on the away-goal rule, as it finished 2-2 on aggregate. The 2-1 win in the first leg made the difference with a squad mostly formed from the players who won the under-16 ('Colts') title earlier this year.

It may be their first taste of Manning Cup football but Williams said that the winning mentality these players have cultivated has put them in good stead for yet another deep run.

"We have a small squad, and I think from that squad about 14 of them played in that Colts final. It's a pretty young team but they have tasted victory already. I know that they are hungry for more. It's just a matter of them getting mature as quickly as possible," Williams told STAR Sports.

It has been an offseason of difficulty for STATHS as they have had to juggle with players lost from the team that made it to the semifinals last year - the most significant being Omar Laing who was murdered in April.

It has also been one of joy when the under-16 players lifted the school's first schoolboy title at any level since 1987, seven days after Laing's passing.

While the offseason has been one of joy and loss, Williams said that what has remained constant is the ambition they have for success and consistency that has seen them play in every Manning Cup semifinals since 2017 and two finals - 2017 and 2019.

"Our preparation is always the same in terms of the ambition that the preparation is geared towards, which is making a deep run. It's a look for us and the programme. To do what we have been doing year in year out since 2017 speaks well for the programme," Williams said.

It is consistency that he hopes will continue with a core that he feels is evolving with each game.

"We have scored well over 40-odd goals. These guys are learning. It's a project that is in its second year. It's all about consistency and the quality of the youngsters that we have working with at STATHS," Williams said.