Canada head home from World Cup with work to be done 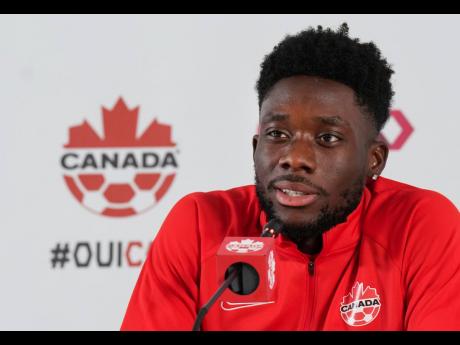 Canada forward Alphonso Davies speaks to the media after practice at the World Cup tournament in Doha, Qatar yesterday.

While Canada are understandably disappointed to be heading home following the World Cup's group stage, in a way the team's work is just beginning with an eye towards 2026.

The Canadians will turn their attention to their preparation for the next World Cup, which they will co-host with the United States and Mexico. Part of that work will be to build a team that goes deeper into the tournament.

Canada played in their first men's World Cup in 36 years, and just second overall, in Qatar. A 1-0 loss to Belgium in the opener followed by a 4-1 drubbing by Croatia scrubbed the Canadians' chances of reaching the knockout round before their final Group F game against Morocco tomorrow.

"This last game is about getting a result and winning for Canada, and really making this country believe that we're in the right direction for 2026," coach John Herdman said.

Canada have ascended on the world stage in the four years since Herdman took over. In 2021 alone, the team went from No. 72 in the FIFA rankings to No. 40.

Because of that low ranking, Canada had to get through the two early rounds of Concacaf qualifying, but they emerged atop the field ahead of Mexico and the third-place United States, which both had byes to the final round.

However, the best finisher among the North, Central and Caribbean nations was the second World Cup team to be eliminated, joining hosts Qatar.

Alphonso Davies salvaged the team's World Cup run by scoring Canada's first-ever men's World Cup goal against Croatia. Davies, who plays for Bayern Munich, is one of a group of Canadian players who have grabbed attention internationally, along with top scorer Cyle Larin, who plays in Belgium for Club Brugge and Jonathan David of Lille in France.

A nation more known for hockey, Canada invested heavily in its football infrastructure heading into the 2015 Women's World Cup, which it hosted. Herdman led the home team at that tournament and is the first coach ever to lead both a men's and women's team to a World Cup berth.

The women's side has flourished, led by Christine Sinclair, international football's most prolific scorer among men or women with 190 goals. The Canadians, who won gold at the Tokyo Olympics, will next play at the FIFA Women's World Cup next summer in Australia and New Zealand.