Pulisic puts his body on the line for his country 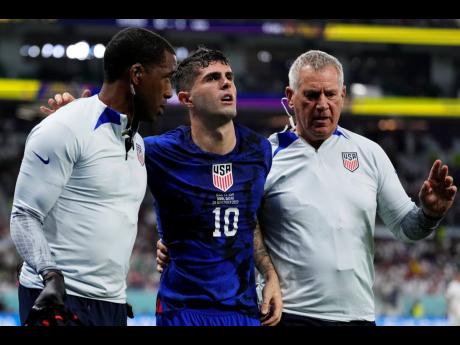 Christian Pulisic of the United States is helped off the pitch after suffering an injury during the World Cup Group B match against Iran at the Al Thumama Stadium in Doha, Qatar, yesterday.

Christian Pulisic kicked the ball, scored the goal and crashed into the goalkeeper, a collision that sent the American star to a hospital and the United States into the second round of the World Cup.

More than an hour later, he contacted his teammates by FaceTime to join the celebration.

Pulisic's 38th-minute goal had held up, and the United States beat Iran 1-0 yesterday in their politically charged rematch to advance to the World Cup's knockout stage.

"Every single player is ready to lay their body on the line to make sure this team is successful," midfielder Weston McKennie said.

After finishing second in Group B with five points, two behind England, the US will play the Netherlands on Saturday with the chance to reach the quarterfinals for the first time since 2002.

"I always say it's us against the world," winger Tim Weah said, "'cause no one believed that the US could play good football."

Back in the World Cup after missing the 2018 tournament, the US needed a victory to reach the round of 16. Iran finished third in the group with three points and have failed to advance in six World Cup appearances.

"The dream is over," Iran coach Carlos Queiroz said.

McKennie started the play for the goal when he lofted the ball from just past the centre circle to Sergino Dest at the edge of the six-yard box. Dest headed the ball in front of the net as Pulisic charged up the centre of the field past Ramin Rezaeian and Majid Hosseini.

Twisting his body, Pulisic redirected the ball with his right foot for his 22nd international goal and first in World Cup play. His momentum carried him into goalkeeper Alireza Beiranvand.

Pulisic was sprawled on the field and for about three minutes as he received treatment. He tried to continue playing but was substituted at the start of the second half and taken by athletic trainer Harris Patel for abdominal scans at Hamad General Hospital, where Pulisic followed the game on phone apps. The US Soccer Federation said Pulisic was diagnosed with a pelvic contusion, returned to the team hotel and is day to day.

Weah nearly doubled the lead in the seventh minute of first-half stoppage time but was ruled offside.

Raucous Iranian fans with horns and drums in the crowd of 42,127 filled the lower bowl behind one goal at Al Thumama Stadium, a circular venue shaped like a gahfiya, a traditional hat.

While the US outshot Iran 9-0 in the first half, Iran had a 4-3 advantage in the second, knowing they needed only a draw to advance.