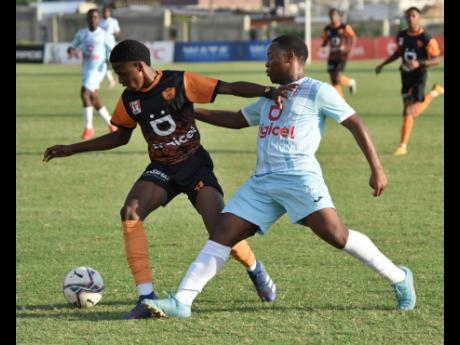 THE Linval Dixon-coached Haile Selassie High outfit booked their spot in Friday's final of the 2022 Walker Cup following a 1-0 victory over Wolmer's Boys School in the opening match of a semi-final double-header at the Stadium East field yesterday.

In the opener, Haile Selassie got their decisive goal in the 57th minute, thanks to wonderful left-footed strike from Jahwan Payne.

Coach Dixon said they were happy for the victory and praised his team's history-making performance. Haile Selassie will play in their first schoolboy football final on Friday.

"I think overall we had a fairly good game, but it could've been better. We created a lot of chances but only capitalised on one, but at the end of the day we're happy for the victory," he stated.

For a Haile Selassie team yet to win either the Manning or Walker Cup, coach Dixon is cautiously optimistic of his team's chances.

"Well listen we're taking it one game at a time, but to make it to the final now, it's really amazing for us as a small team. We're not taking anything for granted because we know we have to get ourselves ready for the final and I'm sure the guys will be up for it," he added.

Wolmer's, who struggled offensively throughout the evening's encounter, had only one clear opportunity which Nando Meggs skied over the bar in the 77th minute. Head coach Jerome Waite stated that his opponents wanted it more than his charges.

"I think they wanted it more than us, and as you know, everybody calls this the "losers cup". Congratulations to the Haile Selassie team." said Waite.

In the evening's second semi-final, four-time champions Tivoli, coached by Christopher Nicholas, got the game's winning strike in the 27th minute, thanks to a brilliant team build-up which was completed by a calm and composed header by Dwayne Johnson.

Nicholas said that booking a spot in a final has been a long time coming for the Tivoli team.

"I'm feeling excited but you know we have one more hurdle and we have the last one on Friday. We are very pleased with today's performance and I'm feeling good to be honest," he said.

Nicholas believes the team can still improve in various areas ahead of Friday's final.

"Definitely our concentration. We can fix it because they were a bit nervous. Some of these players are playing in this situation for the first time. I'm happy they won the semi-final so they'll know what a final is all about," he added.