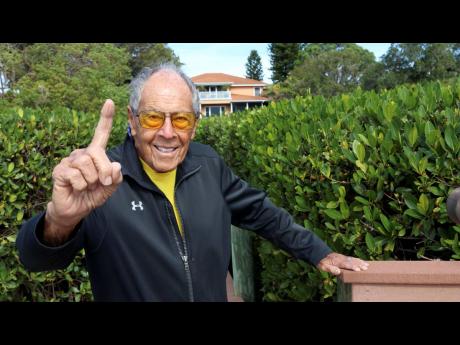 Tennis coach Nick Bollettieri gestures outside his home in January 2021, in Bradenton, Florida. Nick Bollettieri, the Hall of Fame tennis coach who worked with some of the sport’s biggest stars, and founded an academy that revolutionised the development of young athletes, has died. He was 91. Bollettieri passed away Sunday.

Nick Bollettieri, the Hall of Fame tennis coach who worked with some of the sport's biggest stars, including Andre Agassi and Monica Seles, and founded an academy that revolutionised the development of young athletes, has died. He was 91.

Bollettieri died on Sunday night at home in Florida after a series of health issues, his manager, Steve Shulla, said in a telephone interview with The Associated Press yesterday.

"When he became sick, he got so many wonderful messages from former students and players and coaches. Many came to visit him. He got videos from others," Shulla said. "It was wonderful. He touched so many lives and he had a great send-off."

Known for his gravelly voice, leathery skin and wraparound sunglasses -- and a man who called himself the "Michelangelo of Tennis" despite never playing professionally -- Bollettieri helped no fewer than 10 players who went on to be No. 1 in the world rankings. That group includes sisters Serena and Venus Williams, Jim Courier, Maria Sharapova, Agassi and Seles.

"Our dear friend, Nick Bollettieri, graduated from us last night. He gave so many a chance to live their dream," Agassi wrote on Twitter. "He showed us all how life can be lived to the fullest... Thank you, Nick."

Bollettieri remained active into his 80s, touring the world to drop in on the top tournaments and, in 2014, became only the fourth coach to be inducted into the International Tennis Hall of Fame. That was the same year another one of his proteges, Kei Nishikori, reached the final of the US Open.

Six of his pupils already are in the Hall of Fame, a number sure to grow once others are eligible.

"I forged my own path, which others found to be unorthodox and downright crazy," Bollettieri said in his induction speech at the hall in Newport, Rhode Island. "Yes, I am crazy, but it takes crazy people to do things that other people say cannot be done."

The Bollettieri Tennis Academy opened in 1978 in Bradenton, Florida, and was purchased by IMG in 1987.

The IMG Academy now spans more than 600 acres and offers programmes in more than a half-dozen sports in addition to tennis.

Bollettieri was an educator who would brag he never read a book, never mind that he majored in philosophy in college and even gave law school a try, albeit for less than a year.

He also was an adept self-promoter -- one who would publish a pair of autobiographies -- no matter that detractors dismissed him as a hustler and huckster. The truth is, any criticism was no match for the astounding success of his pupils.

His teaching methods were widely copied and tennis academies dot the globe today.