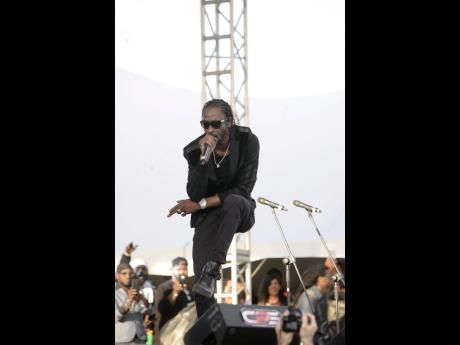 A patron named Ras Colin, hailing from Montego Bay, told The STAR that he comes to Rebel Salute almost every year.

It’s not entirely for the music; he comes because the event continuously delivers on the promise of good behaviour.

In keeping with the all-round natural vibe of the Rebel Salute music and culture festival, it is expected that stage performers adhere to particular behavioural guidelines.

While in the dancehall, it appears that almost anything goes, reggae music events demand that entertainers stick to delivering conscious messages.

As such, dancehall artistes don’t often get booked for the Rastafari-centred celebration. If they do, they must (by nature of the event) adjust their performance to suit the temperaments of the easy-going crowd.


Popcaan was billed using his real name, Andrae Sutherland. So was Beenie Man, as Moses Davis. This year, it was Bounty Killer’s turn.


Rodney Price emerged on Sunday morning at Grizzly’s Plantation Cove. Donning a full black suit textured with velvet squares, he opened the stage with an energetic, welcoming ‘Good morning!’ before launching into the genre’s most visited theme with Down In The Ghetto.


“This is a cultural inauguration. This is not just a concert, it’s a celebration of lifestyle,” he said – after stringing together classic laments Born As A Sufferer and Poor People Fed Up.


‘Miss Ivy’s Son’ introduced Look Into My Eyes – reminding the Rebel Salute audience that it was banned two decades ago – and that it’s poetic relevance remains potent to this day.


Price called out all the themes his music has grazed – education in Book Book Book, promiscuity in Living Dangerously – then took the opportunity to identify the root problem causing rampant violence and crime across the nation.


“State of Emergency is good…but not to fight crime. We need a State of Urgency to fight poverty,” he said. It was an appropriate performance - meant to inspire and educate.