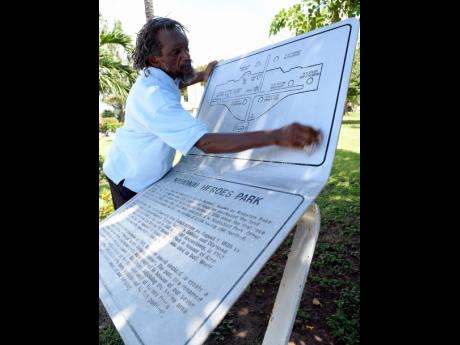 In this 2015 photo, Donald Powell cleans a monument inside the National Heroes Park in Kingston. 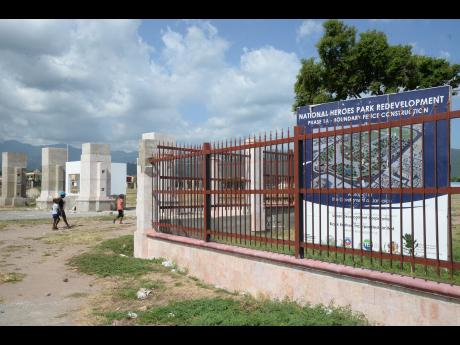 Hey, it seems like my 'box' of Wednesday, May 2, titled 'Save Heroes Park', has been stirring some responses. Yeah peeps, I received official response from the corporate communication and marketing representative of the UDC, saying they want me to meet their team so I can be "apprised more fulsomely of the facts". "Well, look here nuh, on one hand, that sorta mek mi feel important. But on the other hand, it sound like a fancy way of saying mi nah talk di tings right so dem need fi help mi fix up mi argument. What you think?

More importantly, though, I'm getting interesting feedback from the key stakeholders, the people.

Tamara Reynolds, chairman of the Greater Allman Town Community Development Committee, tells me that residents there generally feel disrespected as nobody has been talking with them, so they no longer feel like they are a part of the process. They learnt about the advanced stage of the plans after reading stories in the press and seeing online links to my article. She also tells me that people need to know more about the rich history of the communities surrounding the park. Did you know, for example, that revered National Hero Marcus Garvey was once a KSAC councillor for the Allman Town Division?

Additionally, the sense I got after talking with young poet, modern-day philosopher and Allman Town resident Kevaughn Ellis is that there's some degree of misinformation and plenty mixed feelings among residents about the government's plans for the park. Ellis says residents are hearing that the park will be demolished and they don't feel too good about it, but many don't think they have any real say in what happens. That's sad.

And one former resident, now living overseas, says people are definitely not happy about the developments. He says, "When the Heroes Park Redevelopment project started, we were sold the idea that Heroes Park would be the next Emancipation Park. The picture painted was that children and families would be able to stroll to Heroes Park and bask in its beauty with boutique shops, running trail, kiddie areas, etc." Is that still the plan? Mi nuh know!

Here's what I know, though; calling people together to make announcements about forgone conclusions is not consultation. And for residents of Allman Town, Woodford Park, Kingston Garden and Campbell Town, that park is vital, green, outdoor space that should be protected. Yu nuh agree?