Keep your hands to yourself 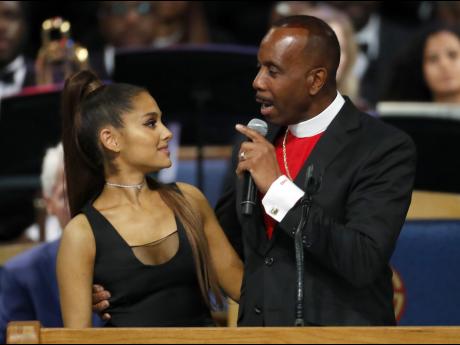 Bishop Charles H. Ellis, III (right) speaks with Ariana Grande after she performed during the funeral for Aretha Franklin at the Greater Grace Temple in Detroit last Friday.

Unless you have been living under a very heavy rock over the past few days, you would have heard that the Queen of Soul Aretha Franklin recently passed away. Her funeral was a star-studded event with many A-listers from the American entertainment industry, including Stevie Wonder, Jennifer Hudson, Ariana Grande and many other coming out to pay their respects to the deceased singer.

The event had much pomp and circumstance, including 100 pink Cadillac cars lined out in the streets and some very powerful tributes, both musical and spoken. With all the outpouring of love, respect and adoration for the queen, it was very disturbing to see what one pastor did right there on the stage, to the complete disgust of many of the attendees and those watching via live stream.

The video that has been circulating on social media shows Pastor Charles Ellis inappropriately touching Ariana Grande on stage after her performance. The video shows the young singer squirming uncomfortably as the pastor's hand touches her breast, and when she tries to pull away, he pulls her in even closer and she seems even more embarrassed. I personally watched the video, and I was uncomfortable seeing how forward this man was and the position she was put in because of his actions.

The pastor has since issued a very weak apology, in my opinion, not because he's sorry, but because of how the public has reacted. Even in his statement, he did not acknowledge that he actually did something wrong. Instead, he said: "Maybe I crossed the border, maybe I was too friendly or familiar, but then again, I apologise."

Looking at the video, his hand was clearly on her breast, so I don't understand how he thought that would have been appropriate.

As if Pastor Ellis' behaviour wasn't already abhorrent, the comments that were made about Ariana's part in her sexual assault were even more disgusting. I was really annoyed by the comments that spoke about the dress that she wore. Many of the comments said that the dress was too short, and even suggested that the pastor had every right to grope her since she was wearing that dress.

The whole incident infuriated me because this is evidence of a culture that still makes it OK for women to be assaulted and then blamed for her experience.

We really have to address the way we see this type of behaviour and recognise that the perpetrators who commit the assault are the ones who should be held accountable, not the victims. This is even more disappointing because after all that has been revealed through the #MeToo movement, the advocacy and education efforts to address sexual assault, and the empowerment of victims and survivors of sexual assault, it's so clear that there is so much more work to be done.

Ultimately, I would love to get to a place where it's not OK for a pastor to stand on a stage of a major event and grope a woman. I cannot understand the people who saw this action and thought: "Yes! That's obviously what she wants. Why else would she have worn that dress?" We have to be more respectful of the female body and understand that the sense of entitlement that seems to exist among powerful men is just not appropriate.

Simply put, KEEP YOUR HANDS TO YOURSELF.