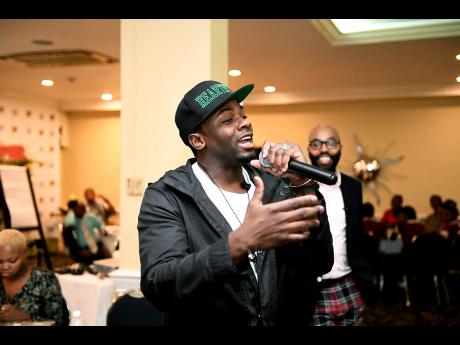 Derek Luke gives some advice to students and teachers as they busily create their scientific lyrics on the scientific method, during the launch of Science Genius Jamaica recently. 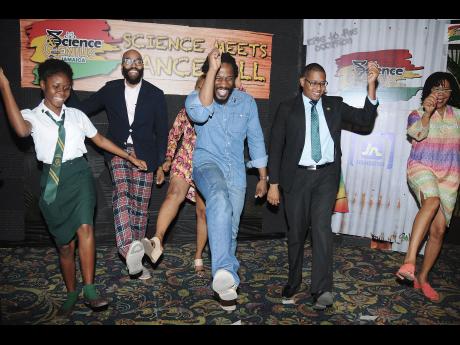 A St Jago High student (left) and Wayne Marshall show the academics and Minister of State in the Ministry of Education, Youth and Information, Floyd Green (second from right), how to 'Stay Up'. Trying the dance move is Professor Chris Emdin (background, left) and beside him, Dr Donna Hope, lecturer at The University of the West Indies (UWI), Mona. Also doing the move is Dr Sonja Stanley Niaah (right), lecturer, UWI.
1
2

The actor, known best for his roles in the films, Antwone Fisher and Friday Night Lights, accompanied his friend Professor Christopher Emdin to the island for the initiation of the project.

"This is the mecca of culture and expression, and what I love is that as a community of creativity, now it's expanding with #DancehallEd," Luke told THE STAR. The hashtag follows the model of #HipHopEd, popularised by Professor Emdin since the beginning of Science Genius US.

"It's the expansion of dancehall with wisdom and intelligence," Luke explained. To participate in the project, schools (grade nine in particular) will be asked to submit preview videos of themselves to the Science Genius Jamaica selection panel by February 28. The submissions will be narrowed to the top 20 schools, before they compete in clashes from which the top-five performing classes will be chosen. The five will then battle it out for the top spot in Jamaica, culminating in May of this year.

Luke told THE STAR that he and Professor Christopher Emdin became acquaintances over social media, eventually developing a friendship, which led to their collaboration on each other's projects.

"My knowledge of real Jamaican music is thorough because to me, if you've ever seen a picture of a map - well, now hip hop is being traced all the way back to Jamaica. So my knowledge of traditional Jamaican music is not just reggae and dancehall, but it's hip hop included. Bob Marley is the king. It doesn't matter where I'm filming, in London, in Africa, there's a Kingston in every country because of the contribution of soul music, pop music," he said.

"Now, just as dancehall and reggae is worldwide, so will the minds in science. There is really no way you can meet Chris Emdin and not become a science genius," Luke said.

Science Genius is sponsored by JN Foundation, and was launched with endorsements from Floyd Green, minister of state in the Ministry of Education, Youth and Information, Andrew Wheatley, minister of science, energy and technology, with a show of support from Opposition spokesperson Julian 'Jay' Robinson, and Science Genius mentors Tifa and Wayne Marshall.