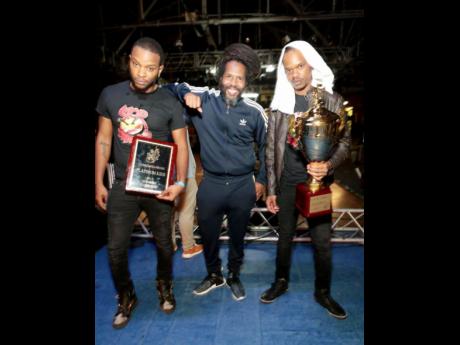 Garfield 'Chin' Bourne (centre) with the Platinum Kids outfit after they won the US Rumble sound in New York City.

All seven sounds entered the Amazura stage hungry for the coveted title of America's National Champion Sound-US Rumble Champion - yet only one sound could walk away with the title and that went to Bronx, NY Platinum Kids.

Platinum Kids had the least clash experience of the entrants. "We may not have the deepest dub box or clash extensively, but over the years we have learnt that it's all about the crowd. Mek sure you entertain them to the best of your ability and win them over," said Marcus, the MC of Platinum Kids.

At one point in the final matchup, Platinum Kids led 4-0, but Black Magic came back to level the scores. Platinum Kids went on to play dubs of Carl Dawkins' Satisfaction and Mighty Diamonds' I Need A Roof to win 6-4.