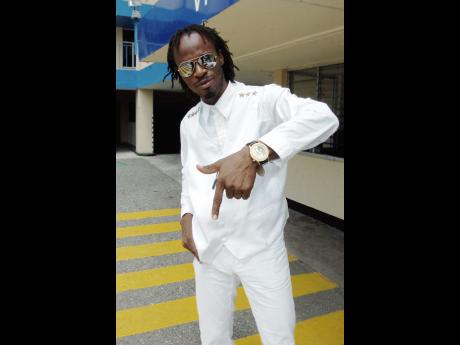 After facing massive backlash from members of the entertainment industry and an alleged attack from a group of Rastas, controversial dancehall artiste LA Lewis said that he is letting bygones be bygones and is fully focused on his music career.

Speaking with THE STAR on Monday, Lewis said that he strongly condemns the attack on him and his children.

"I am not backing from any artistes lyrically, but I am not into any violent confrontation with anyone. The man dem wet up me and me kids dem with liquor and nuff people tink me did ago retaliate, but me na go do that and add to Jamaica growing crime rate. Me will take on all a who a chat off dem mouth on the stage," he said.

The entertainer said that he is clapping back at his 'haters' with the release of three singles called All I Do Is Win, Happy Now, and Crosses, a collaboration with Sol Weatherman.

"Whole heap a people a say dem never hear no song ... so see three big song deh. Me just a answer some artiste and make dem know say me nuh fraid a dem none at all. I'm all about entertainment," he said, while calling for unity in dancehall.

"When hip-hop artiste a war, dem war with album and record sales, but Jamaicans a war with gun. Prince Buster and Derrick Morgan dem used to war on stage and afterwards dem a fren, but dem man ya a war on and offstage," he said.

The entertainer, who was recently dubbed as the 'Ate Star General', became the centre of controversy late last year after he released a picture and video of himself performing oral sex on a woman.

This sparked outrage, especially among the males in the dancehall industry, who chastised him for his taboo behaviour.

Sizzla Kalonji in particular had very harsh words for Lewis, and even promised him a kick in his throat.

Lewis responded by inviting and encouraging the Rastafarian artiste to take a taste of the 'forbidden fruit'.