I can see clearly now - deejay has blindness scare 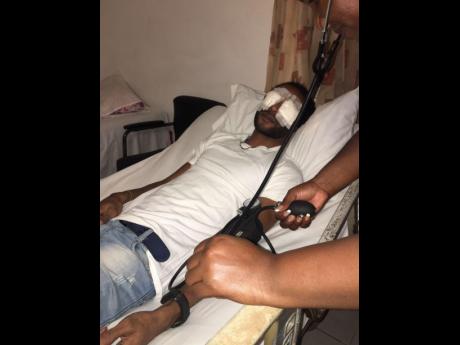 When dancehall artiste Insideeus first decided to tattoo the corneas of his eyes red, he had a devil-may-care attitude as he was blinkered by the lure of fame and success.

But 18 months later, he changed his mind when his eyesight began to fail.

"I had made up my mind a long time ago to do it, so when Alkaline first came out and said he did it, I didn't care if people would label me a copycat. Red was my favourite colour, and I had to grow my career and tune in more people, so I made the decision to do it," the artiste, whose given name is Sanjae Mitchell, said.

Insideeus did the operation in September 2016.

"The reaction from people was immediate and I started to build a fan base and do shows, even without a major song," he said. The attention jump-started his career.

In 2017, he released the song Despicable Wine that made it to the playlists of BBC 1 Xtra in the UK, and did well in Chile and Australia.

However, his joy was short-lived.

"In late 2017, I got scared when I realised that I wasn't picking up things more than like a few yards out. I could barely make out faces but if it wasn't up close, I couldn't read it," he said.

He returned to the US for consultations. The doctors recommended corrective eye surgery.

He did the procedure last month at the Medical Center of the Palm Beaches in West Palm Beach, Florida. But Insideeus said he would do the tattoo again.

"Why not? It definitely work, it jump-start my career and if you look at life, all the people who are successful took risks; it is a no-pain, no-gain situation," he said.