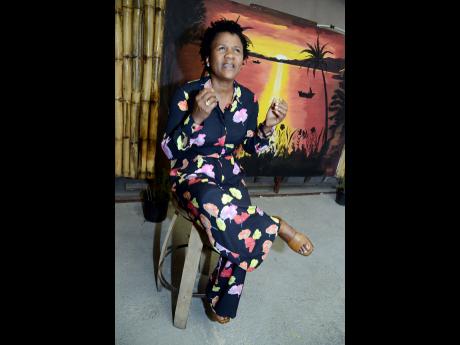 After spending a great deal of time with her children, grandchildren, nieces and nephews in the United States, Minister Marion Hall has returned to the island in anticipation of her new music hitting the streets. Formerly known as Lady Saw, Hall, last week, released the first single from her upcoming album. The song, called 'I'm Gonna Fast', precedes the release of her second gospel album, 'His Grace', to be released on July 12 (her birthday).

"On December 14, 2015, in my room in my house I heard when the Lord said, 'Evangelist Hall'. I was back and forth in the room, talking to the Lord and the Lord talking to me, saying, 'You are now my servant who will be ministering on my behalf.' So that's what I'm doing. I'm ministering on his behalf. I'm his minister, his servant, his vessel. Wherever he sends me, I'll go," she told THE STAR.

Since walking away from the secular life, Hall has taken time to recoup before jumping back into the studio.

"What I've learnt since I got saved? What I can say I learnt is that money they say it's the root of all evil? Lawd, it brings a lot of contention, enemies, bitterness, arguments, animosity. But the money I make now, it don't cause arguments and contention. There's no jealousy, nobody fighting me for any position," she said.

Despite describing life in the dancehall as contentious, she still sees and connects with past colleagues.

"I haven't maliced anybody, definitely not. I never used to have friends like that. I had a few who I thought were friends. Even if you have friends, things happen and friendship break up, but you move on. But I still talk to everybody," she told THE STAR.

"I saw Angel, Stacious, Beenie Man, Vegas a whole lot of them, maybe five months ago on a flight and we had our conversations. I see Ghost all the time, but I can't tell you I had friends. I had associates back then."

Hall's close friends are not a part of the dancehall space. "One of my friends, she way down in Australia, another friend in Florida, one in New York. Those were grown people like myself or older than I. I like to sit with them and have conversations. I like that they are successful people in business and I gravitate to women like that, powerful women. Not that people in dancehall aren't like that, but we used to be crabs in a barrel, tearing down each other," she explained.

The once-prominent dancehall figure also still benefits from her former life. To this day, Hall collects royalties for Lady Saw. "Yes, money still come, and guess what? The wealth of the wicked is laid out for the righteous," she said.

Meanwhile, fans may note that the gospel singer's social media pages are private.

"I had someone clean them up because a lot of people are disrespectful. That someone made it private," she told THE STAR.

"We all know what sex is. I was the goddess when it comes to that. You don't have to be pushing anything on me because I already know what it is. The Bible was never against sex, so I'm not against it, but they keep pushing .... . A lot of people will try to put things on there that is inappropriate for me right now not just this moment, but the rest of my life."