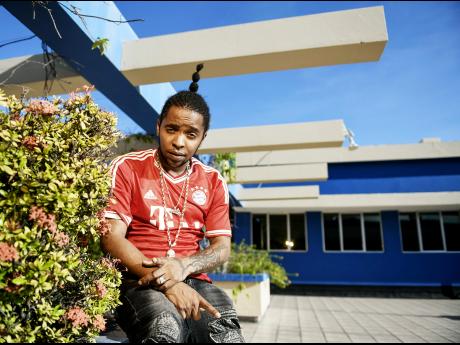 STAR of the Month Shane O.

When Jamaicans weren't hearing songs from Shane O on local radio, there was the belief that he had given up on the music industry.

But the notion that Shane O did give up or that he is now emerging from a dry spell isn't accurate.

This former child star, who rose to fame with his hit song Lightning Flash back in 2004, admits that he got caught up in the 'friend and company' downward spiral of celebrity life.

Regardless, remaining an active part of the local music industry was simultaneously a necessity and a natural occurrence for STAR of the Month.

Even though he returned to rule the airwaves with his own vocals with recent hits Last Days and party hit Partner Draw, Shane O's melodies and lyrics have been a mainstay in the dancehall for all the years he seemed silent.

Very few recording artistes, particularly in music arenas like rap and dancehall, are slow to admit when they utilise the skills of ghostwriters.

During his time out of the limelight, Shane O remained actively engaged in the dancehall music industry, selling his lyrics.

"So more time dem say, 'Yow, boy! Shane O can write good, innuh. Find him!' You zimi?" he said, with a burst of laughter.

"A whole heap a song mi write, mi nuh even wah too call. Nuff song mi write, you zimi? Remember when me give all Yanique (Curvy Diva) Lifestyle? Mi never did have nuh song a play," he continued.

But not having any songs in the streets while watching the success of songs he wrote for other people did not become a deterrent for Shane O.

Beyond sustaining the career he's passionate about, Shane O said that he kept going in the industry for the sake of his family.