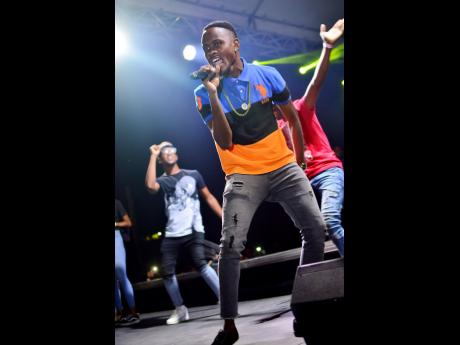 'Watz on Sale' deejay Laa Lee Ranks is angered by the messages his manager, Cara Vickers, received from a disc jockey of Suncity 104.9 FM last week, threatening to ban his songs from the radio station.

"This DJ's behaviour towards my manager a woman - was not only disrespectful, but also disappointing and to me, by extension," Laa Lee told THE STAR.

He continued, "I see it fit for him to be punished by his employers in the harshest way possible, including a public apology from him on Instagram and on air."

According to Vickers, the conversation started by telephone, then continued via WhatsApp and email, with the DJ making an enquiry to book the up-and-coming dancehall artiste for an event that the radio station is planning to execute.

"First, he messaged me saying he is the owner of the radio station, and I went into negotiations with him," said Vickers. "Naturally, as a businesswoman, I requested that he send me a formal proposal via email."

That's where a simple business deal went downhill. She says it was proposed that her client, Laa Lee, would be booked for the event if he accepts heavy rotation on the station as payment. But that arrangement was not accepted.

The resulting conversation was a heated debate between the two in which the DJ threatened to have Laa Lee's songs banned from being played, and declared that 'by September he [Laa Lee] is nobody again' as seen in a screenshot of the WhatsApp chat screen.

The screenshots of the conversation were in turn posted on Laa Lee's Instagram page.

When THE STAR contacted the radio station, a representative made reference to a statement, which was posted on the company's Instagram page.

It read that the allegations about the DJ/staff member had been acknowledged and additionally stated, "We do not condone any inappropriate behaviour or action by any member of our team. And as such, we are investigating the matter internally. If the person is found culpable, then the appropriate action will be taken."

Also, that 'no ban' has been confirmed on any artiste, whether established or up-and-coming.

"Whether staff member, relative or associate, the station has a corporate responsibility to vet the persons who represent it. I feel like the station is taking the easy way out nobody apologised to any of us, neither Romario (Laa Lee's given first name), who was emotional about it," said Vickers.

An obviously frustrated Laa Lee said, "Mi vex, him violate but I'm getting wiser every day. Nuff other disc jockeys support me as a young artiste even on [that station]. I just hope no other artiste has to experience this type of treatment."

The deejay did not expect having to deal with issues like this while the focus was on promoting his new single, Jackie Chan, which was released on digital platforms and was featured on iTunes last Friday.