Lady Ciara to use Miss Shades title as stepping stone 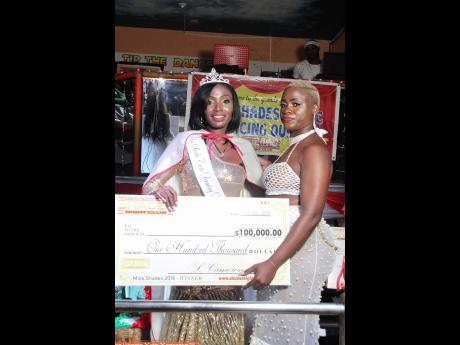 Contributed Lady Ciara (left) being presented with the winner's cheque by Tavia Morris.

Like so many ambitious people who know what they want and are determined to achieve their goal against the odds, Lady Ciara is heading down the right road.

Ciara finished second in last year's contest, but assumed the title after last year's winner had to give it up due to personal reasons.

Now, she has earned it on merit and fully intends to enjoy her reign.

Along with the crown, she got $100,000 and gift baskets and also won several sectional prizes, including for most intelligent and most seductive.

She told THE STAR she was confident going into the competition "from day one.

"I just knew I would win. I was well prepared and I just did my best, and that's it," she said.

Ciara sees exotic dancing as just another job and is unconcerned about the stigma attached to it.

"I always feel safe; I never feel threatened by anyone, I just do what I have to do," she said.

She spent a year dancing in Kingston before moving to Shades Nightclub three years ago.

"Dancing is something I enjoy. It was always in me growing up, I've always wanted to be a dancer and I'm very good at what I do. But I just want to do one more year and that's it. I only plan to do one more year in this field, then I will do my own thing," she said.

Her own thing means her own business, which she declined to disclose.

"Right now I'm just gonna enjoy my reign, have fun. Next year, I'll be a sponsor for one of the girls in next year's pageant," she said.

She said her prize money will go towards owning her own business.