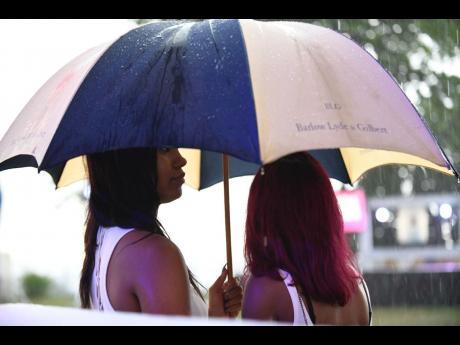 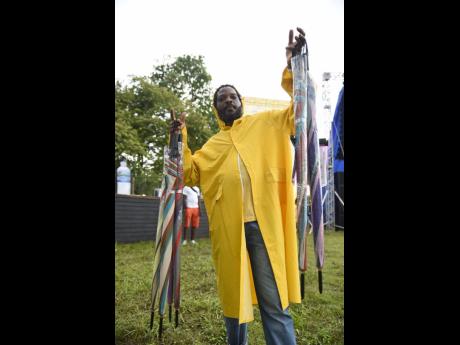 Junior, the umbrella man, has been selling umbrellas for $1,500 a piece at Daydreams as party goers seek to stay dry in Negril. -- Gladstone Taylor photo
1
2

Some Daydreams patrons have been splashing out as much as $1,500 to purchase umbrellas after the heavens opened and dumped rains on Negril where thousands of party lovers have gathered for Dream Weekend.

Just as party fans were getting ready for Daydreams this afternoon, the clouds over head changed to stormy grey and not long after the showers came. At one point thunders were rolling in unison with the bass of the speakers.

Mainly outfitted in fancy swimsuits, sheer coveralls, stylish sandals, and dresses that leave little to the imagination, all-white patrons of Daydreams were not prepared for the stormy weather. Some party goers were forced to seek refuge in various cabanas and tents, including that covering for the restroom area, as the sudden downpour swept across the grassy venue. 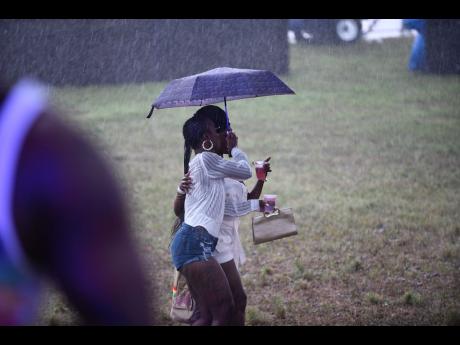 Kerine Bryan, a first-time patron, stood looking hopeless with an umbrella she had bought from Junior, a vendor who is cashing-in on the adverse weather conditions.

“I can only hope it doesn’t get worse,” Bryan said before beating a hasty retreat after a lightning flashed by.

Junior, the umbrella man, who is known for being ready for any storm, has been scanning the venue to find persons willing to purchase umbrellas as well as plastic phone protectors.

Catherines Peak, one of the sponsors of Dream Weekend, distributed 60 umbrellas, but that was insufficient to cover the scores of persons also had their promotional ladies quickly providing the early patrons with branded umbrellas.

DJ Crazy Neil,  after noticing patrons vacating the main area in search of shelter, quipped that, “Next year patrons should consider investing in white water boots to go along with their outfit for the theme.”

But  with no apparent need to break the musical entertainment, the event is progressing as service attendants are making all the necessary preparations; covering speakers with tarpaulin to protect them until the go-ahead is given to remove the unsightly blue covers.