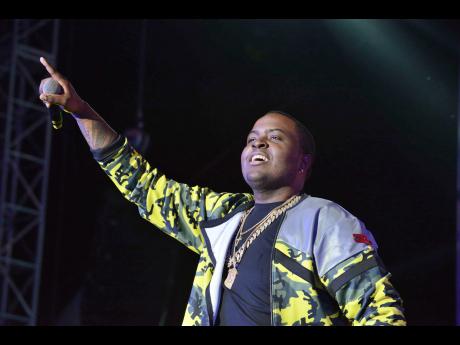 Jamaica-born international R&B artiste Sean Kingston is hoping to get his first Grammy-nomination by way of the Billboard Chart-topping album, 'Tropical House Cruises to Jamaica'.

The album, which was released by Contractor Music Group/Amada Records back in January, spent more than 10 weeks on the Billboard Reggae Chart and more than four consecutive weeks in the number one spot.

Sean 'Contractor' Edwards, CEO of Ocho Rios-based Contractor Music Group, told THE WEEKEND STAR that the album was submitted to the Grammy board for consideration as a Best Reggae Album contender. He said the album's submission was accepted.

If the album makes the final cut, Kingston would be among several artistes, including incarcerated deejay, Vybz Kartel who would earn their first Grammy nomination.

Kingston and Kartel are featured on the song Chance. Speaking with THE WEEKEND STAR, Kingston said the nomination, should it materialise, would be an accomplishment for him, but also for Kartel, one of the "baddest deejays in dancehall".

"It would be a blessing to be a part of an album that gets a Grammy nomination. I would be really excited and I'm sure everyone else that's a part of it would also be very excited, including Vybz Kartel," he said. "The Grammy is a big thing and it can change a lot of stuff for any artiste across any genre, but I think that for a dancehall artiste like Kartel it would be a huge thing. Vybz Kartel is one of the baddest deejays in dancehall. He's been one of my favourites since I came into the music business, so it would be an honour being nominated with him for a song we both worked on."

Although there's still a long way to go before the shortlist of albums is announced, Kingston believes the album can go all the way.

"The album is a great work of art, a diverse selection of songs with a great selection of artistes. It's an album that has something for everyone," he said. "It gives you that mainstream type of vibe, and gives you a broad feel of the different types of sounds that come out of Jamaica. That's an album that deserves a Grammy nomination and I feel it has what it takes to go all the way."