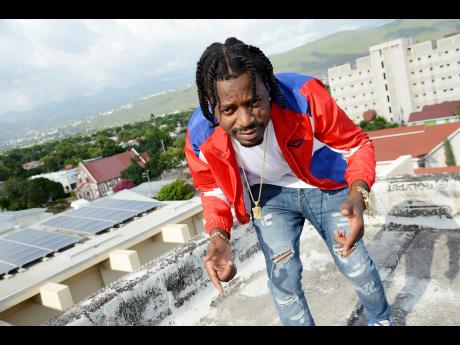 As he gears up to head to the United Kingdom next month, STAR of the Month Govana believes that he is more than ready to take on the international scene. While some may have considered him to be an 'iron balloon', the time spent in Aidonia's camp schooled Govana on how to cement his name as a true artiste.

Before getting his big break in dancehall, Govana spent years using the moniker Deablo, and it is time that was put to good use.

"Mi nuh do nutten as mistake. Mi plan out everything before mi try execute it. Mi have more experience than most of the other artiste dem weh a breakout recently. When mi go around the world, mi have songs weh big a Europe, some weh big regionally as Deablo," Govana told THE STAR.

Those years of travelling and performing with Aidonia allowed Govana to build an indisputably impressive catalogue of dancehall music. Impressive as it may be, Govana believes he got his real 'buss' in the industry after the recently released Gyal Clown.

"Some people misinterpret it, but me really feel seh the big buss come after Gyal Clown. You see 'buss' different from just getting a hype. Run Road went number one, but never buss mi, because mi still can walk pon road and nobody nuh see me. We get the 'look-een' on Run Road, but we never get the buss till Gyal Clown. Then Bake Bean really take it pon a next level, then One and Move cement it," he reasoned.

In 2015, Govana released No Complaining under the Deablo moniker. The song did well, but it wasn't enough for him to become a household name.

"Then we go Trinidad a couple time, but that is still no buss. All of the years of recording all those songs and dem nuh really reach weh we want it to reach, what it do is make me build a catalogue. It build me as a person," he said.

"Mi never did a travel the world by myself, because Aidonia did a bring me on shows and dem ting deh. I've been on the road so long. I've been in all of those regions and territories. Mi know what's required here, what's required there, so mi well seasoned. Seasoned overnight," he said.

With his increasing catalogue and a passport that is filling up with travel stamps, Govana is ready to take his career even further.

"If you a do music and nah do it for Billboard or Grammy, gwaan a yuh yaad. We really and truly a pree dat. We're very ambitious," he said.