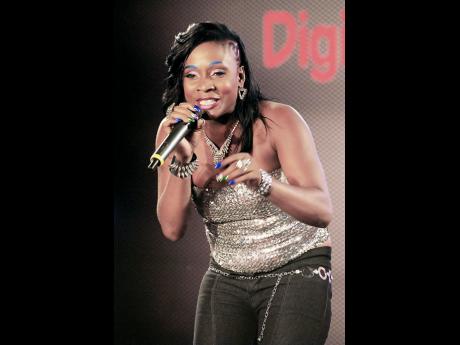 Sassy Silva, one of the 2013 winners of the Magnum Kings and Queens of Dancehall competition, is today hoping that a partnership between herself and fellow artiste Delly Ranx will lead to her big break in the industry.

But aside from the buzz she got last year as a result of a tribute song to Bounty Killer, Sassy Silva has been unable to find her footing in the highly competitive dancehall space.

In an interview with THE WEEKEND STAR, the entertainer explained that she has had to find persons who believe in her talent. She says she may have found that in Delly Ranx.

She said that while the Bounty Killer tribute went viral, she didn't really get much "justice" from it.

"Maybe because it was a tribute song and was basically about one person, but the hype was short-lived," she said. "I was still inside the studio doing some work here and there and thought that if I try again with a different song, I could get some justice, and so, I decided to try again with the song Gimme A Jump-Start on Delly Ranx's Mouthwash rhythm, and it has been really well-received so far."

"Delly Ranx and (producer) Snowcone dem link me and say dem think me a one a di baddest deejays inna dancehall and me nah get no justice, so dem say dem a go run wid the song," she said about the current partnership. "Me voice it for them over seven months and was waiting patiently for the release. This is the song that I believe can be the icebreaker for me, the one that can gimme a jump-start. The official release is October 5, but some radio stations start play it already."

Lamenting how difficult the industry is to manoeuvre, Sassy Silva explained that when she didn't get her big break, she considered altering her personality to give the Jamaican audience what she believed they wanted.

"I think that I don't get enough justice as an artiste because I don't sing the raunchy stuff that people singing. I am a person of morals, and at one point, I even thought about changing my style," she said. "But I remember that I rocked Jamaica without gyrating on the stage and I won Magnum Kings and Queens without singing a raunchy song, so me know me can make it without changing my style. I live by a certain standard, and although the business kinda rough, me still nah give up."