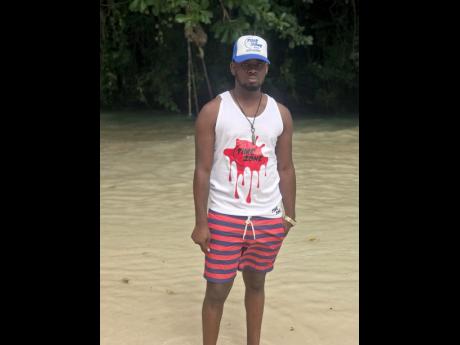 Andrew Aldridge in one of his Time Zone designs.

Never one to shy away from supporting positive messages, the young designer is now looking to focus on promoting black consciousness through a new line.

The former Mico University College student said fashion is a huge part of entertainment and can be used to serve a deeper purpose than simply enhancing one's appearance.

"Jamaica is faced with a colour problem, and this is not just because Spice raised the topic. It has been something that has lurked over my head for awhile now," he said. "The youth need to start digging deep to find themselves, and those who know better have to become teachers."

Aldridge revealed that he has been passed over on some opportunities because of his skin colour, and says he wants to use his brand to promote self-respect.

"We live in a society where you are still judged based on the colour of your skin and what community you are from. The mental trauma that blacks in the Caribbean went through during slavery still exists 300 years after slavery was ended," he said.

"I have seen black women and men bleach their skin until they are unrecognisable. This includes persons from both the upper and lower class in society, both the educated and uneducated, and to me, that is unacceptable."

To share his message, he said that he came up with the idea of putting quotes advocating for black consciousness, on his caps.

"Just like music, my clothing will carry a message to change that.

After all, you are what you wear. I just want the black community to recognise that we are a unique race and we should be proud of that. Our genetic make-up is powerful and should not be underestimated," he said.

Aldridge said that the new collection will be released in short order and will be very affordable due to the importance of the message.

"I don't want any naysayers trying to say this is a money, thing because some people will miss an entire conversation and find something negative to say. This is about us, and I would give it away free if we didn't have a production system to maintain, because knowledge comes with a cost," he said.