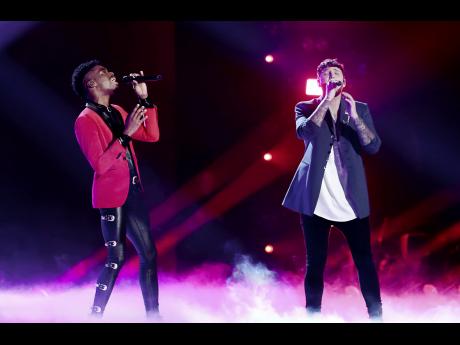 He copped the top spot with his single Power of Love, a duet with former 'X Factor' winner James Arthur.

Harris' latest accomplishment comes less than two weeks after he was crowned the 2018 champion of the international talent competition.

The singer made the announcement via his official Instagram page on Monday.

Pointing out that the feat would not have been possible without the love and support of the fans, Harris thanked his supporters for downloading the track and making it number one.

"All right, guys. This is my first number one song. This is all because of you guys," he said in the post, which featured a photo of the trophy he was awarded for the accomplishment. "Thank you so much. I don't know what to say. This is for you guys. I have a number one song and got an award."

Harris' duet did not take long to nab the number one spot. Following his victory announcement, the track debuted at number four on the charts.

Many are predicting that Harris will achieve the coveted Christmas number one, but according to international news media, he will need to hold on to the top spot for another three weeks in order to achieve that.

The STAR understands that the Christmas number one spot has not been achieved by an X Factor winner since 2014, with Ben Haenow's Something I Need.

In a recent interview with the UK media, Harris, well aware of the pressures of living up to the X Factor title, explained that he doesn't expect success to be handed to him.

He also highlighted that based on the different levels of success past winners have achieved, he knows he will have to put in the work to ensure his own success.