Star of the Month: Spice explains why she is still single ... Describes her ideal man 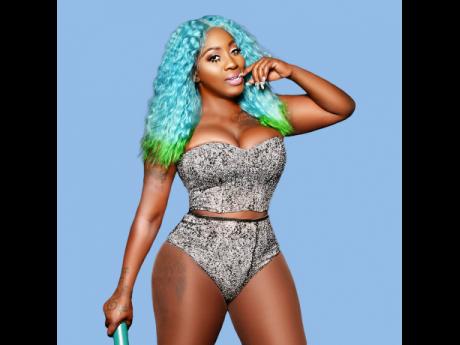 Star of the Month:

Dancehall Queen Spice says that at the moment she is without a king and it does get lonely on the entertainment circuit.

"It's hard for me to be in a relationship," Spice told The STAR. She is adamant that she is not putting any man before her career.

The Romantic Mood deejay explained, "Even if I start dating, sometimes you may find that the man starts to complain about my time or lack of time ... . Anyone I talk to would have to be so understanding of what my career requires. He would have to be making more money than me; once I am talking to a man with less money, he automatically becomes egotistical," Spice said.

She said that men naturally boast egos and sometimes it creates an unnecessary problem within the relationship.

"I don't want to say I am better off but in a better position, financially, and not all of them can manage dating an independent woman," she said. "Some want a woman that is dependent on them; that quality makes it difficult for me to date a man."

Previously engaged, Spice revealed that her former fiancE never had all the characteristics that made him the ultimate match and that resulted in their split. Since then, she has been flying solo.

"Mi nah nuh man, mi single," she exclaimed, confirming that she is one of Jamaica's most eligible dancehall bachelorettes at the moment. But outside of the dollars and cents, Spice has a type in mind.

Unsurprisingly, the 36-year-old said she is looking for a man with admirable qualities.

"I can be very sarcastic and tend to tease, so any man thinking to be with me would have to have a thick skin; I would like to be with someone who has a sense of humour," she said.

Spice also described the kind of man that she is looking forward to date and, eventually, hope to settle down with. She said her ideal man should be loyal and ambitious.

"Of course, I would have to date him to see if he is loyal, and nowadays it is very hard to find a man that is faithful; but being the type of person that I am, a family-oriented woman that is protective of my children, I don't plan on bringing home someone that is going to end up disappearing," she said. "My children have a lot to do with me dating and I have to make sure I choose the right person before I bring him into my home around them, and all that."

She also said she doesn't want a lazy man, because she is "overly ambitious" and works very hard.

She is not particular on physical characteristics like race, but pays keen attention to personal care, including clean and properly groomed fingernails and the way a man dresses.

"I'm a finger person; I like to be touched, but there are some men who don't cut, clean or care them fingernails," she said.