Delly Ranx thrilled to have been part of Buju concert 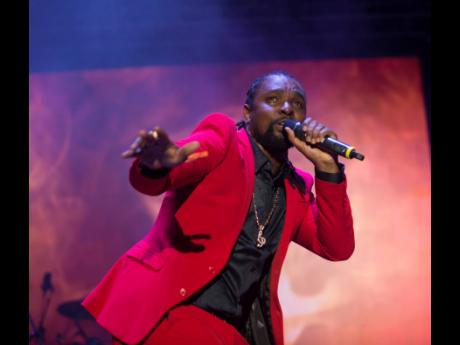 Delly Ranx was one of the many artistes who performed at Buju Banton’s Long Walk to Freedom concert which took place last Saturday at the National Stadium.

The entertainer/producer, who is a close friend of Buju, says that he’s happy to see him return to the spotlight, and he is pleased that he was invited to be part of the event.

Decked out in a dapper red suit, Delly Ranx was the third act to hit the stage. He wasted no time as he delivered a tight set, which included hits such as Headache, Red Bull & Guinness, What A Gal Can Wine, Sweet Reggae and Friendship.

“Buju is one of the most loved artistes in reggae and dancehall music, and the people came out and gave him their full support. I feel honoured that I was part of the line-up for this history-making event. I delivered an excellent performance, and the fans showed their appreciation,” he said.

Delly and Buju’s friendship goes way back. Delly produced two singles with him, Things A Come Up on the Saudi Arabi rhythm in 2011, and What’s Wrong, featuring Luciano.

“Buju and I have been great friends for many years; he’s like a big brother to me, always encouraging me and offering a word of guidance throughout the years,” he said.

Delly Ranx is also known for his prowess as a hit-making producer; his résumé includes popular dancehall favourites such as Popcaan’s Family and Mavado’s Wah Dem A Do.