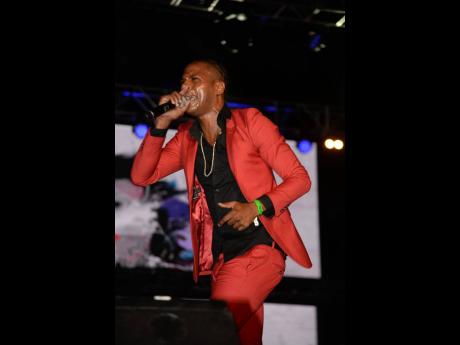 Dancehall artiste Dexta Daps has earned a reputation for being a 'ladies man'. Considered as a sex symbol, he is known for pushing the envelope when it comes to sexualising dancehall music.

In 2017, the artiste released an eight-minute short film for his album, Intro, which saw him and a female lead engaging in some steamy sex scenes.

Today, Dexta Daps has stolen the spotlight once more after a video of him and a female fan engaging in 'dry sex' on stage during a live performance went viral earlier this week.

The video, which has been making the rounds online, sees Daps inviting the female on stage to dance with him as part of his act. As soon as she touches the stage, though, the woman proceeds to remove the top half of her romper, exposing her breasts. Save for a pair of black pasties that concealed her nipples, the woman was half-naked.

Daps, who doesn't seem to be shocked by the woman's brazen actions, takes her undressing as an invitation to touch her, and proceeds to caress her breasts while she grinds on him. Their impromptu 'sex show' is welcomed by a screaming audience.

The video was posted by Daps on his social media page on Monday and was reposted on Tuesday morning after being deleted. It has since been removed again, but only after racking up more than 90,000 views and hundreds of comments.

While some social media users heaped praises on Daps for living up to his expectations as a sex symbol, others expressed disappointment at the display between the entertainer and the female fan.

Professor Donna Hope told THE STAR that while she has never seen the on-stage connection between artiste and fan get that intense, she is not shocked because of who Dexta Daps is as a performer and an artiste, as he has always prided himself on giving sexually charged performances.

"The person who comes out with the most egg on their face is the young lady because she is the one getting all the backlash. Dexta Daps is going to get a wave of publicity. More women are going to want to go to his shows and hope they get a chance to grab on to him. It really is a win win for the artiste," she said.

"Male dancehall artiste tend to use female bodies and women as props as methods to elevate themselves. Women need to be more aware of what they're getting into. She could have gone on stage and dance wid him, but she chose dry sex. And, in these situations, the woman normally gets the black eye."

Popular radio disc jock ZJ Sparks shared similar views. She believes that in the age of social media, the female should have thought about what would happen when videos start circulating.

"I have seen Dexta perform a few times, and before he even hits the stage, ladies go crazy, wild like they are losing their minds. They typically try to get on the stage to touch him or tear his clothes off," she said.

"He was in an adult space. I don't know if it was an act - meaning the girl was part of the act - or it was a random woman. If it was random, she seemingly willingly performed with him, and the crowd was enjoying it. Women are often shamed for acting sexy and sexual in public. However, it was two adults in an adult space."

Women's rights activist Nadine Spence said that while the video may come off as distasteful to some, both parties were consenting adults.

She said that if Daps had pressured the woman into getting undressed or touch her without her approval, then there would be something to be 'up in arms' about.

"I might not approve of it, but I am not required to approve of their actions," Spence said.